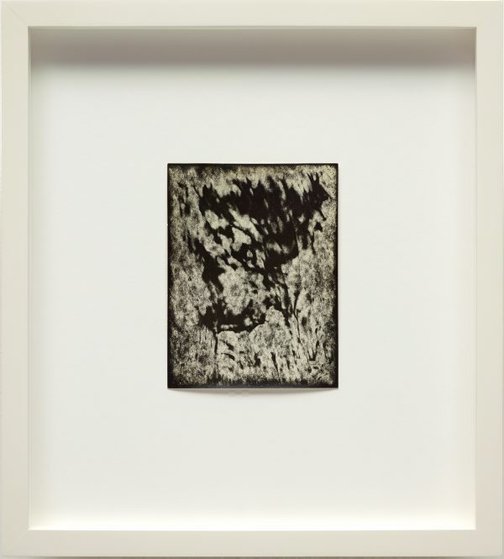 American artist Alison Rossiter relinquishes the most elemental photographic gesture – the taking of the shot – by abandoning the camera altogether and producing photographs that rely solely on the raw material of the print itself. Rossiter’s work returns the photographic process to first principles, eliminating an external subject and exclusively privileging the event of photographic inscription and the act of recording light on a photo-sensitive surface.

Since 2007, Rossiter has collect expired packets of unexposed photographic paper, some of them dating from as early as 1900. Without any further intervention, she develops the sheets of paper in her darkroom. The pockmarked patterning that is unearthed through this process is a residual trace of the light leaks or chemical imbalances that the paper has been exposed to over the vicissitudes of time. What is technically a mark of ruination and decay is elevated into a compositional scheme. Surrendering herself to chance, Rossiter creates a humble portrait of the act of photographic inscription. What we see – that which has been recorded on the photographic surface – is simply the passing of time. This is not the singular instant that the camera records with the click of the shutter but a durational aggregate – the lived time of the photographic substrate. The work is a memorial not to a discrete subject but to the very material of the photographic form.

In ascribing the term ‘memorial’ to Rossiter’s work it is possible to acknowledge the melancholic sensibility that underpins her practice. These photographs are about mourning even as they exult the slow gestation of an image over time. That which is being mourned is the future of analogue photography itself. Most of the papers that Rossiter exhumes through are no longer in production. Their expiration dates are both literal and figurative, serving as a symbolic portent to the threat of obsolescence that haunts the analogue process against the increasing ubiquity of digital technology. By reasserting the physical and chemical reality of the print as a unique and singular event – insofar as her compositions depend upon an extended exposure that cannot be re-staged – Rossiter resists the speed at which images circulate in a contemporary media environment. Her photographs are slow in incubation time but also in terms of the contemplative disposition they demand from their viewers.