Angus Nivison was born in Walcha, northern New South Wales. Apart from his schooling in Sydney, including study at the National Art School during the early 1970s, he has spent all his life on the family property in that part of the state, where until more recent years he was a dedicated grazier. His relationship with the land has informed his imagery deeply as a painter since he began exhibiting in 1982: drought, flood, rain and mud, mountain and plain, and the hard slog of keeping a property viable. Both pre-occupations have been precarious.

The grids and stripes in Nivison's earlier work were a distillation of his admiration for Ian Fairweather, but in recent paintings there is a release from structured enclosure evoking windows, doors and blinds, branches, twigs and sapling clumps, towards a more direct orchestration of mass and great shafts of dark and light. His paintings are a true reflection of experience; part of which perhaps is an inheritance of melancholic poetry from the Irish predecessors of this land, of which Nivison now sees himself as guardian rather than owner.

Nivison won the Wynne Prize in 2002 for his large-scale polyptych 'Remembering rain'.

Browse other works by Angus Nivison 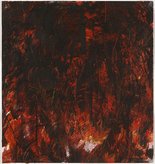 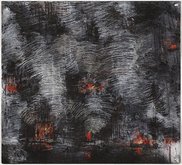