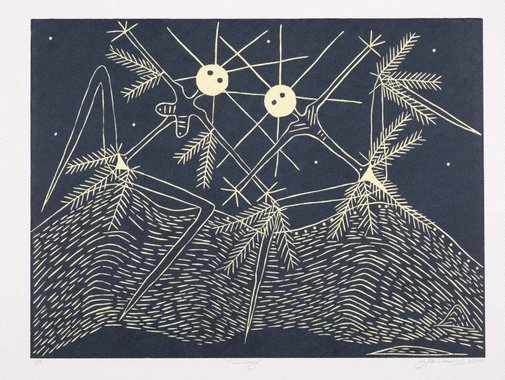 Julie Freeman, as a Gorawarl Jerrawongarla woman is a traditional owner for south Sydney and the south coast of New South Wales. Freeman comes from Sydney’s local Aboriginal community of La Perouse, the first urbanised Aboriginal community, and the representation of this community within the collection is important in terms of the Gallery’s commitment to local and state practices. Freeman is an accomplished and recognised artist, cultural leader and story teller and produced a relatively small amount of work, making these works an important addition within the collection.

Freeman’s work will sit alongside the Gallery’s holdings of important shell work from La Perouse, including the work of Emse Timbery and Lola Ryan, and the work of her cousin, photographer Peter McKenzie.

As a senior cultural knowledge holder Freeman’s work tells important creation narratives for the local environment, firmly placing the region within the cultural Indigenous framework. Her suite of prints culturally contextualise well known mountain landscapes of the south coast within their traditional local Aboriginal understanding, reminding ardencies of the knowledge system of the traditional owners.

Browse other works by Julie Freeman 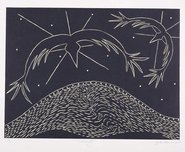