Woman is born, from the series Genesis 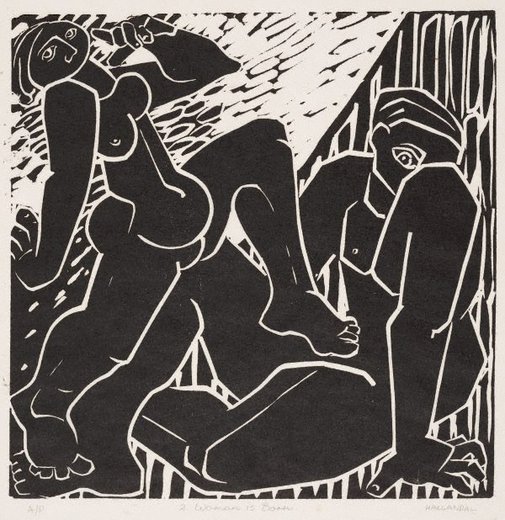 In Pam Hallandal's Genesis series of linocuts she has explored one of the great classic subjects, the biblical Old Testament text (in the book of Genesis), of Adam and Eve in the Garden of Eden, which has inspired artists from the earliest times. The biblical text describes the idyllic garden in which God placed the first man Adam, God’s creation of Eve – the first woman, the temptation of Eve by the serpent, the eating of the forbidden fruit of the Tree of Knowledge and the consequent loss of innocence and expulsion of both Adam and Eve from the garden. In these linocuts Hallandal’s experience as a sculptor and draughtsman enabled her to simplify and exaggerate line and form to powerful graphic and emotive effect, drawing upon aspects of the story to explore the expressive possibilities of the nude. In the enclosing first and last prints of the series, she has pushed the boundaries of figuration to render a more poetic and abstracted evocation of the Garden.

Pam Hallandal is a respected Melbourne-based artist who is admired for her many years as a teacher of drawing to art students. Since the 1970s her focus has been almost exclusively on drawing – but her original training was in sculpture and ceramics. This series of linocuts is from that early part of her career during the 1950s, when she was working mainly as a sculptor and began to make prints as a part of her working process. On the activity of making prints she states:

" ... through them I have attempted to better understand the potential and meaning of positive and negative forms on a plane – ways to express and use an edge – dark and light weighting and so on ... besides the sculptor in me enjoys the cutting. It liberates me."

artist's proof (one of only two complete sets printed.)

Browse other works by Pam Hallandal