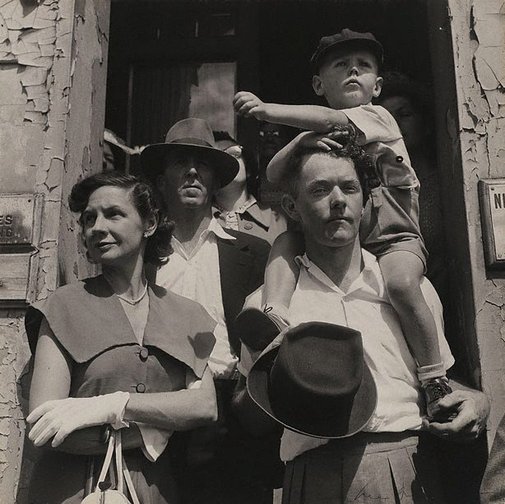 Filmmaker John Grierson's now famous definition of documentary as ‘creative treatment of actuality’ inspired Max Dupain. ‘At the procession’ isolates the figures, seemingly by accident, as the camera reduces the group from the crowd and reveals a complex social construction of three people in the foreground with one behind. The observers of the procession, one of whom notices the photographer, are now observed by the viewer. Dupain wrote in 1950: ‘the moment round about the time of exposure is the most emotionally intense period for the photographer, when the psychic interplay between subject and operator is at its highest level.’ 1

The viewer can socially participate in this spontaneous captured moment. The three figures of man, child and woman in the foreground suggest a family unit and, from the title, leisure and a day out. The father and child represent a social renewal, as the men are free, no longer a part of military processions commonly seen during the war years. Standing on steps to gain a better view, the group forms a solid triangular shape with the child at the apex representing the future, or possibly a generational sacrifice to a future war. This human geometric composition taken from a low viewpoint is underpinned by the small triangular shapes of collars and hats as the clean whites zigzag up the image. The politics of the postwar years emphasised the family, repositioning women into the home to be supported by male breadwinners. Here the arrow-like hat points to and suggests a socially secure future.

Max Dupain
At the procession