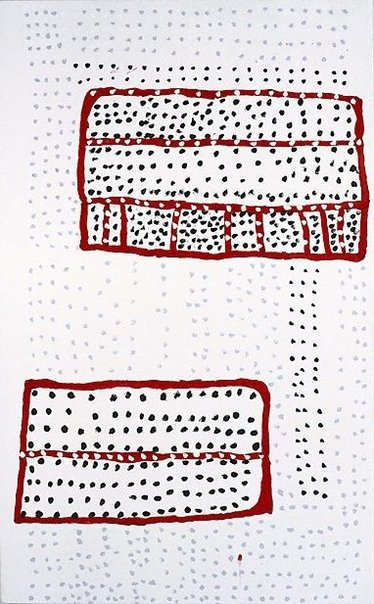 Larrakia painter, singer and dancer, Prince of Wales (Midpul) frequently camped with his family at Cullen Beach, Darwin. This once pristine harbour is now an upmarket, waterfront real estate and marina development. For Aboriginal people across the northernmost parts of Australia, however, its name remains notorious as a Westernisation of 'Kahlin', the compound where Aboriginal people rounded up from coastal camps and Aboriginal children who had been forcibly removed from their parents were detained. Prince of Wales's life was shaped by the destiny he shared with many people whose traditional lands were favoured for the establishment of non-Aboriginal settlements.

Prince's father, Imabul (Ichungarrabilluk) and also known as King George, resisted the encroaching colonisation of his people's land. By 1916, Darwin was prohibited to Aboriginal people, and Imabul lobbied strongly for the right of his people to live in their country. Sadly, his father passed away early in Prince's life, leaving his son to eventually inherit his traditional responsibilities to the Larrakia people. Prince grew up with his mother's people, the Wadjigiyn, at the Belyuen Aboriginal Reserve on the Cox Peninsula across the harbour from Darwin. Here he came to realise his father's legacy, proving his prowess as a singer and dancer. Prince was a celebrated performer, whether leading initiation ceremonies or performing for the Queen of England.

After suffering a stroke that restricted his movement, Prince moved to the Kulaluk beach community. A member of the Dangalaba clan of the Larrakia people, he was one of the original claimants in the 1977 Kenbi Land Claim. However, even though this land claim is now the longest-running in the history of the 1976 Northern Territory Land Rights Act, Prince did not live to see its resolution.

In taking up painting in 1995, Prince found a medium through which he could retain the essence of his active ceremonial life. His paintings have a musicality imparted by the lively staccato-effect of dots and intermittent bars, as if to be read like the sheet music for an improvised symphony. Prince's uninhibited use of colour belies the origins of these designs, which were passed on by his ancestors as marks on the bodies of ceremonial participants. His early works were painted on scraps of cardboard and other found materials, their compact size emulating the proportions of the body. In his last years, Prince 'upped the ante', scaling up his 'Body Marks' paintings to assert his cultural authority as a Larrakia elder, as embodied in his statement, '... I make the marks.'

© Estate of Prince of Wales and Karen Brown Gallery, Darwin

Browse other works by Prince of Wales