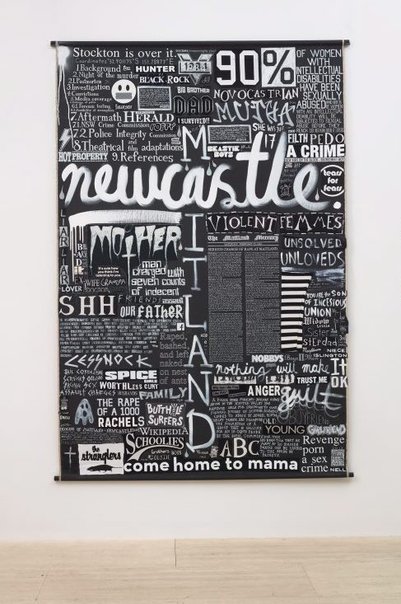 The town names Newcastle and Maitland intersect in the centre of Nell's painting 'Newcastle meets Maitland', 2015, in a cruciform shape that refers to Christian iconography but also the ironic adoption of the cross by rock bands and other pop and subculture groups. The town names are written in white on black in a deliberately handwritten scrawl that conveys a passionate urgency but which could also be a t-shirt or band poster design conveying a raw authenticity. The white on black text and the crucifix echo the visual language of New Zealand modernist artist Colin McCahon whose black and white painting 'Teaching aids 2 (July)' 1975, in the AGNSW collection, uses both text and crucifixes to refer to matters of life and death.

Nell's work also refers to life and death, in this case acts of sexual violence towards women in the Newcastle and Maitland region. The Christian iconography conveys the fact that sexual abuse was at times perpetrated within religious organisations. The painting quotes newspaper reports and online coverage of specific episodes that occurred in the region, which also resonate with broader issues of violence against women in Australian culture. In addition to the accounts of violence, Nell has depicted logos, images and song titles that suggest the normalisation of violence in pop culture.

Nell's powerful work has been painted with great care by the artist who has elaborately written the text passages by hand and embroidered and enriched the surface with collage elements. This concentrated making conveys the importance of the subject matter to the artist and the mindfulness needed to convey these episodes to the public. While pop culture and music can help normalise damaging behaviour, it can also provide release and escape. The artist has previously said "Growing up in regional Australia I had limited access to art. I couldn't see a Caravaggio but I could buy a CD, a Nirvana live album, and I could play it and suddenly I'm not in Maitland anymore, I'm there at the concert." [1] The capacity of music to enable an escape from difficult circumstances, to provide a redemptive moment or a vision of an alternative future, is also conveyed in this work and has been a frequent reference in Nell's practice.