The cow in the reeds 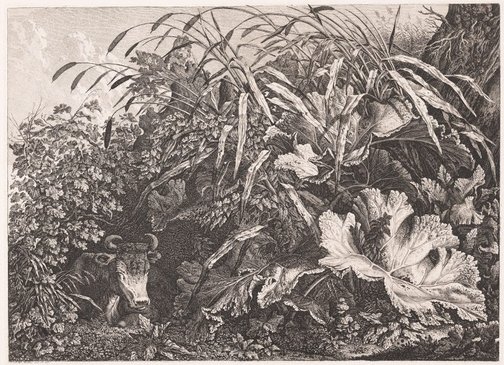 German Romantic art usually calls to mind soaring visions of great forests and unattainable mountain peaks, epitomised in the transcendent landscapes of artists such as Caspar David Friedrich. How different then is this intensely observed patch of earth with its gigantic, grub-chewed burdock leaf unfurling in the lower right of the composition.

This enchanting image was made by Carl Wilhelm Kolbe, an artist from Dessau who devoted himself solely to drawing and etching and who ranks as the most exceptional printmaker of the German Romantic movement in the years around 1800. The cow in the reeds is one of his Kräuterblätter (vegetable sheets), a term Kolbe coined to describe his group of 28 etchings which focus on finely detailed depictions of vegetation growing profusely in natural settings.

Various commonplace meadow plants are rendered with an accuracy that would suit a botanical illustration, but Kolbe selected a worm’s-eye view so that we experience the intimate scene as if immersed in a secret forest of gargantuan leaves, capable of seeing the bent reeds from underneath. In addition, the artist has placed a cow in the scene, glimpsed resting happily between outcrops of luxuriant undergrowth. By weakening the viewer’s sense of scale, Kolbe fashions an image that hovers between the realms of reality and fantasy, and the effect is utterly beguiling.

Kolbe’s heightened awareness of and emotional sympathy for the particularities of the natural world can be seen as part of the wider enthusiasm for nature so characteristic of Romanticism, which often carried a pronounced mystical significance. The German Romantics believed that nature revealed a divine purpose, and that its representation in art was akin to a form of worship. Kolbe claimed that ‘trees have turned me into an artist’ and saw his works as expressions of patriotic sentiment, inspired by his rapturous excursions in the woods near Dessau. In his autobiography and correspondence he described the experience of such solitary rambles:

I feel so alone with myself, so comfortably at home, and so distant from the world and the roaring tumult of mankind. Every dark shadow that here and there a lost sunbeam penetrates, every green thickly-thatched vault that the tall oaks build over me, every lovely thicket that on all sides presses in on me and stretches out its arms sensuously towards me as if it wished to embrace me and wrap itself around me … alights my imagination as if with a magic wand …

Kolbe came to art late in life, enrolling at the Berlin Academy of Art at the age of 30 in 1789, where he was taught by the classicist Asmus Jacob Carstens. Although Kolbe excelled in drawing from the antique and the life model, his abiding interest was landscape. He especially revered the Dutch landscapists of the 17th century, above all Antonie Waterloo and Paulus Potter, claiming that an etching by the latter was the direct source of inspiration for a number of his own compositions. But he eclipsed such models in terms of his sheer originality. Kolbe was also deeply influenced by the idyllic poetry of the Swiss writer-painter Salomon Gessner, and travelled to Zurich at the invitation of Gessner’s family to make engravings after his drawings. Kolbe worked not only as an artist but also as a language teacher and philologist, with published treatises on German and French vocabulary to his name.

Carl Wilhelm Kolbe
The cow in the reeds