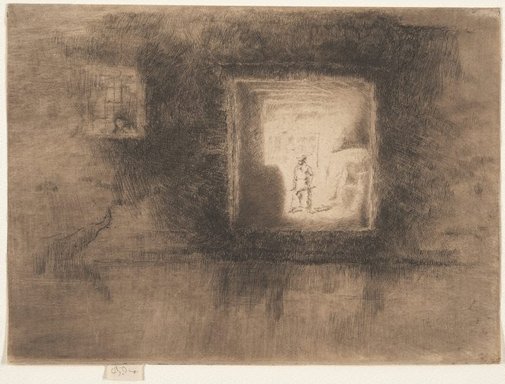 In 1877 Whistler showed his painting Nocturne in black and gold: the falling rocket at the inaugural exhibition of the Grosvenor Gallery in London. The leading art critic, John Ruskin, wrote that he ‘never expected to hear a coxcomb ask two hundred guineas for flinging a pot of paint in the public’s face’. Whistler sued Ruskin for libel, with the trial heard at the Old Bailey. Although Whistler won the case (he was awarded the derisory sum of one farthing in damages), he was obliged to pay the legal fees. In May 1879 he was declared bankrupt, stripped of his assets, including his house in Chelsea, and his collections were auctioned.

In the wake of these events, the Fine Art Society in London commissioned Whistler to visit Venice for three months to produce a series of 12 etchings. As it happened, the beauties of the city so delighted and inspired the artist that he remained there for over a year, returning to London with 50 etching plates and about 100 pastels. On his return he immediately set about printing Venice, a series of twelve etchings, which was shown by the Fine Art Society in December 1880.

This was followed by A set of twenty-six etchings of Venice, known as the ‘Second Venice Set’, published by Messrs Dowdeswell and Alphonse Wyatt Thibaudeau in 1886. Nocturne: furnace was published in this series. Whistler developed the plate over many states, refining the figure inside the doorway and elaborating the shading and reflections with more and more fine, spidery lines. In the seventh state, represented by the Gallery’s impression, Whistler delineated the figure more clearly and added horizontal lines above the head at the window on the left to suggest windowpanes.

Whistler was interested in the role that inking played in the individualisation of his prints, and to this end he undertook the printing of the plate – and, indeed, of the entire series – himself. His love of what later generations would call ‘artistic’ or ‘interpretive’ inking involved leaving ample tone on the surface of the plate and manipulating it so that each impression would manifest subtle differences and variations. Inking was as important to his artistic intentions as the etched lines themselves. His concern to make each impression in a sequence unique marked a new development in the role of printmaking – a goal that, after all, was antithetical to the very nature of the medium.

In Whistler’s hands printmaking was carried to the limits of refinement and aesthetic preciosity: he introduced such mannerisms as trimming away the margins of his prints, leaving only a small paper tab at the bottom on which he pencilled his famous butterfly, developed from the letter ‘W’. The abbreviation imp. (imprimé) indicates that Whistler was also the printer. An etched version of the butterfly monogram can also be seen in Nocturne: furnace on the left side of the print, halfway between the gondola and the window.

The print is one of five etchings representing Venetian nighttime subjects. Whistler ignored the popular tourist spots and sought out the more picturesque, hidden corners of the city. He also invented daringly simplified compositions and devised novel drawing techniques to depict the floating quality of Venice in an original, highly evocative way. Whistler explained his drawing method to his Australian- born disciple Mortimer Menpes, who later relayed it in his memoir Whistler as I knew him (1904):

I began first of all by seizing upon the chief point of interest. Perhaps it might have been the extreme distance – the little palaces and the shipping beneath the bridge. If so, I would begin drawing that distance in elaborately, and then would expand from it until I came to the bridge, which I would draw in one broad sweep. In this way the picture must necessarily be a perfect thing from start to finish. Even if one were to be arrested in the middle of it, it would still be a fine and complete picture.

Nocturne: furnace presents a view through a dark doorway into the radiant interior of a Venetian glassblower’s furnace. The contrast between the brilliantly lit interior, with its arduous human activity, and the encroaching gloom of a side canal, has been achieved by manipulating the film of ink left on the surface of the etched plate. Whistler is less concerned with the details of the subject than with the final effect of the image, which exudes subtlety and mood and is almost abstract in its conception.

etching and drypoint in brown ink 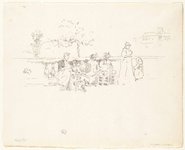