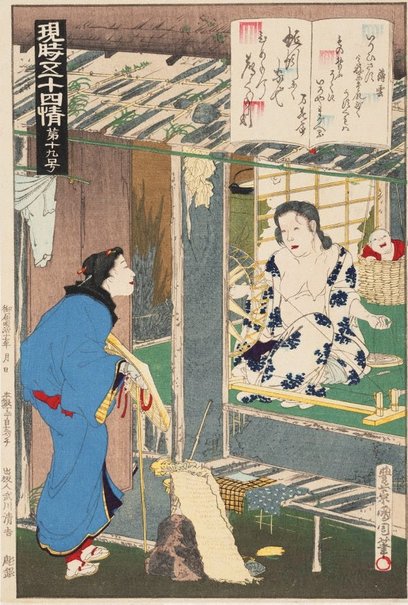 The classic novel 'The Tale of Genji' written by the court lady Murasaki Shikibu about 1000 years ago has served as a source of inspiration not only for painters and lacquer artists from the 11th century onwards, but has also captured the interest of 'ukiyo-e' artists, who adapted with a huge amount of wit and imagination the exclusive world of the Heian period’s courtly elegance to the more down-to-earth realm of the townspeople in the Edo period. Kunichika’s series thus joined the long and rich tradition of 'ukiyo-e' prints illustrating or parodying the fifty-four chapters of the tale. The title 'Fifty-four modern feelings' ('Genji gojūyon jō') is a play on words, in that the first two characters 'genji' meaning 'modern times' has the same pronunciation as the name of the protagonist in the tale, namely Genj; and the last character 'jō', 'feelings', is a homophone of the word 'chō', 'book, chapter'.

In chapter 19, 'Usugumo', Genji takes his illegitimate daughter by the Akashi lady from her mother’s care so that the girl could be brought up more adequately in his mansion in the capital. Of humble birth, the Akashi lady is traditionally depicted in a rural, modest setting. Kunichika stretches the interpretation of her simple lifestyle to the extreme by depicting her as an old hag with loose, unkempt hair and sagging breasts, living in a shabby hut. The little Akashi princess, usually depicted as an adorable little girl, is shown here as a crying baby put in a bamboo basket. Instead of the Shining Prince with his splendid entourage, an old lady is coming to visit them. The cartouche in the form of an open book in the upper right corner bears the Genji crest, 'Genji kō', of the 19th chapter in alternate blue and red colours as well as a text excerpt.

A student first of Toyohara Chikanobu (circa 1838-1912) and later of Utagawa Kunisada (1786-1864), Kunichika specialised in actor prints ('yakusha-e'), whereby he has invented the panoramic composition of actors’ portraits that stretch over three ōban sheets. He also produced numerous sets of famous views, historical subjects and journalistic illustrations. Like his teacher Chikanobu, Kunichika’s artistic merit has undergone a reappreciation in recent years.