Bull I, from the series Bull profile 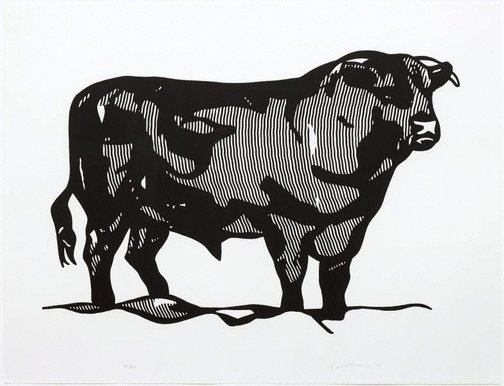 Lichtenstein explored the ‘progression’ of an image from ‘representation’ to ‘abstraction’ in both paintings and prints of the early 1970s. In 1972 he executed the painting ‘Pitcher Triptych’. The following year, at Gemini G.E.L. from February to September, he completed the six multimedia prints of the Bull Profile series and the three of the Bull Head series. The painting ‘Cow Triptych’ followed them in 1974, and Lichtenstein periodically returned to this compositional device, as in the ‘Tel Aviv Mural’ (1989). Lichtenstein’s bulls relate to Theo van Doesburg’s ‘Composition (The Cow)’ (1916-17) and to Picasso’s eleven ‘Bull' lithographs (1945-46).

In both the Bull Profile and Bull Head series, Lichtenstein combines line-cut with lithography and screenprint. In 1989 Lichtenstein gave permission to Artists to End Hunger, Inc., to reproduce the Bull Profile series on a set of six 13-by-13-inch porcelain plates in an edition of fifty, plus six artist’s proofs. The publication was the benefit of the International Art Show for the End of World Hunger, in which Lichtenstein’s print series was exhibited.
(Corlett, ‘The Prints of Roy Lichtenstein’, 2002).

Browse other works by Roy Lichtenstein