'Thoroughwort flowers' with accompanying calligraphy (Chapter 30), episode from the 'Tale of Genji' 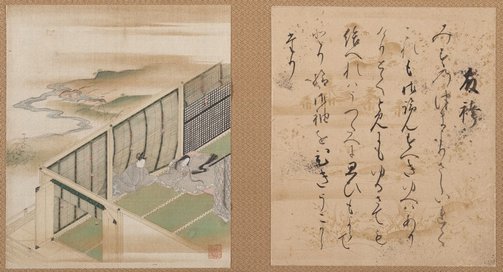 The protagonists of the image representing the 30th chapter of the Tale of Genji, Fujibakama (“Thoroughwort flowers”) are Yūgiri, Genji’s son, and Tamakazura, his adoptive daughter. In this chapter, Genji has arranged for Tamakazura to be appointed as “wardess of the ladies’ apartments” ('naishi no kami') at the imperial court. Yūgiri has been sent as messenger to convey the confirmation of her appointment. Having learnt that she is the daughter of Tō no Chūjō and thus no longer related to him, Yūgiri begins to court Tamakazura openly. Using the opportunity to see her directly with only a bamboo curtain between them, Yūgiri brought her a bouquet of “purple trouser” ('fujibakama') flowers which he pushed under the curtain. As she reached across to accept the flowers, he grabbed her sleeve and recited a poem to explain the meaning behind the flowers and to express his true feelings for her. The scene of Yūgiri’s aggressive advances is vividly depicted here. Instead of the usually colourful and gorgeously decorated robes, both figures are shown in somber grey robes, duly worn as they were both mourning the death of their grandmother.

The scenes are jewel-like in their miniaturistic detail, a signature of Tosa-school narrative painting, in which tradition Gukei was trained. The faces are delicately outlined, with the utmost care and a high sense for decorativeness applied to the intricate textile patterns. Characteristic for Gukei is the wonderful translucency of his colour palette, which imbues the paintings with a soft, dreamy atmosphere.

Accompanying this picture is an album leaf of the same size which bears the chapter title and a prose excerpt, written in an elegant cursive script. The square 'shikishi' sheets were originally pasted into an album, facing each other, with the text on the right and the picture on the left.

Trained in the courtly tradition of the Tosa-school, Gukei was called to Edo to serve the Tokugawa Shoguns as official painter working on the large commission of a pictorial history of the Toshogu shrine, where the founder of the Tokugawa Shogunate, Ieyasu, is buried and worshipped. Along with the Tosa-school in Kyoto, the Sumiyoshi lineage is considered the most important exponent of the indigenous 'Yamato-e' tradition.

Chapter 'Fujibakama' from the 'Tale of Genji' with accompanying calligraphy