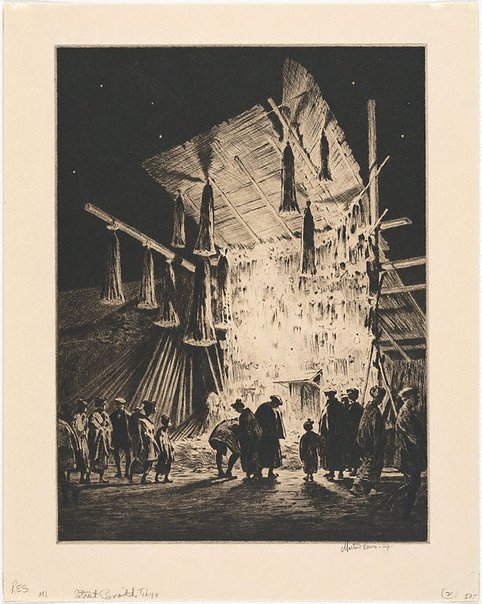 Martin Lewis was born in Castlemaine in 1881. As a teenager he moved to Sydney, in 1899, where he studied briefly at the Julian Ashton School and contributed two satirical drawings to the Bulletin. The Gallery has two pencil drawings of Berry’s Bay from this period.

Lewis left Australia for the USA in 1900, settling in New York, and remained there for the rest of his career, which reached its peak in the 1930s, with sell-out editions, prizes, and a book published on his work in the 'Masters of etchings' series (which included among 26 artists Rembrandt, Whistler and Goya). Lewis died in 1962.

He was inspired to visit Japan in 1920-22 because of a long-held interest in Japanese art, particularly prints. He traveled through the countryside, living for a while near Fujiyama, and making a number of drawings and paintings. After his return to New York he produced a series of etchings based on his Japanese experiences.

'Street booth, Tokyo, New Year's Eve' is the largest and most impressive of Lewis' Japanese prints. A preparatory drawing, probably from a sketchbook, is extant, with a different number of figures; it is inscribed with 'Shimenawa seller's booth/ Hongo Tokyo'. It was also influenced by the work of British etcher Muirhead Bone.

"New Years Day is an important holiday in Japan. The Japanese traditionally decorate their streets and homes with shimenawa, knotted straw ropes blessed and purified by Shinto priests to commemorate the new year, as depicted here". (McCarron, pg. 118)

Purchased with funds provided by the Australian Prints, Drawings and Watercolours Benefactors' Fund 2007