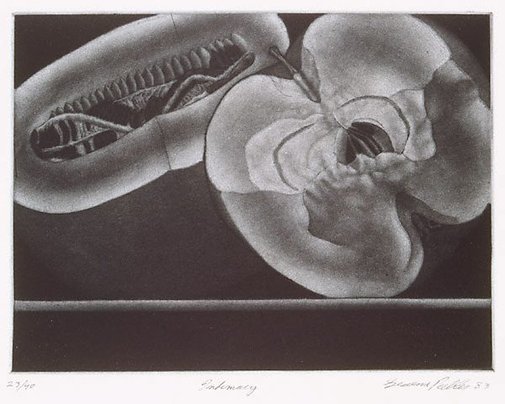 Graeme Peebles was born in Melbourne and studied printmaking at RMIT 1973-75, with further studies in Italy and England in 1976-77, specifically on the mezzotint. He has exhibited prints and has taught printmaking in Melbourne since 1977.

He made his first mezzotint in 1973 while a student at RMIT, after seeing a reproduction of one by Hamaguchi in Anthony Gross's book' Etching, engraving and intaglio printing' (London: Oxford University Press, 1970). Tate Adams, who was teaching there, had a mezzotint rocker, so Peebles embarked on two years of experimentation, supplemented by technical books on the subject. His first instruction in the medium came in 1976 when he went to England. He worked for three months at the New Crane Studios, learning how to print mezzotints, and visited the British and Victoria and Albert Museums to look at their print collections. His early work is principally still life, the object drawn directly on to the plate; often there are metaphorical links; for example he often uses fruit whose shapes lend themselves to innuendo.

Browse other works by Graeme Peebles