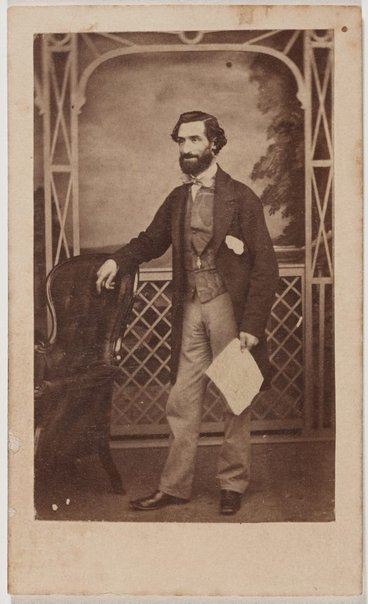 Alfred Bock is distinguished as the first known Australian-born photographer. Bock was born in Hobart Town in 1835 to Mary Ann Cameron, née Spencer, who lived with, and eventually married, Thomas Bock. Alfred was given Thomas’s surname and regarded him as his natural father. Thomas Bock taught Alfred painting, drawing and photography, and he assisted his stepfather in his daguerreotype business until establishing his own studio in 1855. Despite ongoing financial difficulties (he was announced insolvent in 1857 and again in 1865) Bock succeeded in introducing the carte de visite to Hobart in 1861 and became expert in the sennotype process. In addition to his experimentation with photomechanical techniques, he also hand-coloured portraits and experimented with over-painting photographs. Bock showed his work at the London International Exhibition (1873), the Philadelphia Centennial Exhibition (1876), the Sandhurst (Bendigo) Industrial Exhibition (1879), the Adelaide International Exhibition (1887) and the Paris International Exhibition (1889) and received several awards.