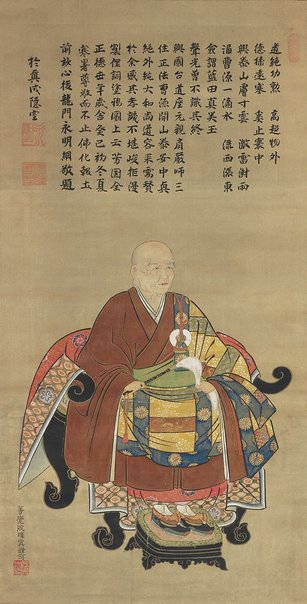 Hōitsu is more commonly associated with his key role in the revival of the decorative Rinpa school founded by Ogata Kōrin (1658-1716) than with the formal genre of Zen religious portraiture (‘chinsō’). Yet from his youth he explored a variety of painting styles. He was born into a powerful clan family and was able to pursue his artistic interests freely, including the study of Kano school artists, the Ukiyo-e manner of Kitagawa Utamaro (1753?-1806) and Nagasaki bird-and-flower painting (1). Following the death of his brother in 1797, Hōitsu took Buddhist vows in the Pure Land sect and spent the rest of his life painting and promoting the Rinpa style in Edo.

Abbot Zetsugai was the 241st abbot of the eminent Myōshin Temple established in Kyoto in the fourteenth century. He is depicted, according to ‘chinsō’ conventions, in three-quarter view, wearing his ecclesiastical mantle (‘kesa’) and seated cross-legged on an abbot’s throne. He holds in his hand a white fly whisk (‘hossu’), which protected Śakyamuni Buddha at his birth and symbolised the ability of the teacher to remove obstacles to the student’s enlightenment (2). Abbot Zetsugai died in 1713, so it is likely Hōitsu painted this depiction to replace a damaged original. The signature and seal suggest it was completed when Hōitsu was aged between forty-one and forty-four (3).

The image of Abbot Zetsugai was not intended as a realistic portrait but as a talismanic image to confer the blessings of the Dharma teaching lineage and to establish a ‘karmic bond’ between the lineage holder and student (4). The ‘chinsō’ portrait acted as an icon, which, following ritual animation through enshrinement rites (‘anza’), became like the living ‘double’ for the deceased teacher during memorial services and other rituals (5). The inscription in scholarly calligraphy contains subtle poetic allusions to the spiritual realisations of Abbot Zetsugai as well as to the Chinese Seventh Patriarch of Zen, Shen Hui (684-758), and reads:

The Dharma supreme, achievements glorious
Transcending from this physical world
Virtues spreading to the remote frontiers
Surely far beyond this land.
Inches of cloud that rose on Mount Tai:
Now roaring thunder and timely rain
A drop of water that sprang from Caoyuan:
Gushing flows to the west, surging tides to the east.
All composed with refined jade of Lantian,
The sound and light knows no bounds.(6)

The postscript states that the calligraphy was added by the poet in response to a certain monk who asked him to place the inscription on the portrait: ‘Moved by his filial piety and sincerity, I have no heart to refuse the request. I casually [being humble] made this doggerel and scrawled it on the painting.’