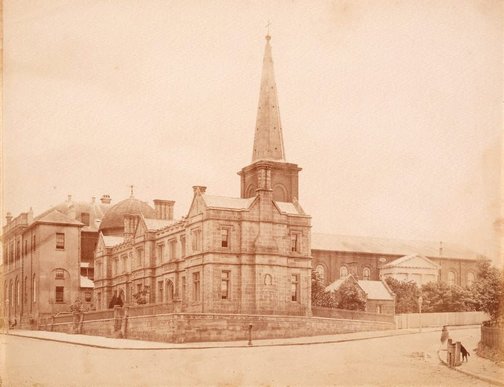 After the death of his mentor and business partner Beaufoy Merlin in 1873, Charles Bayliss embarked on a solo career, enthusiastically patronised by the mining entrepreneur B. O. Holtermann. Despite his youth (he was 23), Bayliss was already highly accomplished both technically and conceptually, and he continued to develop and finesse many of the ambitious projects initiated by Merlin. Among these was an extraordinary venture to document every building of any importance in Victoria and New South Wales. The grandness of this topographical mission stemmed not only from commercial considerations but also the desire to explore ‘a novel means of social and commercial intercourse’ through the photographic medium.i

The parameters of such architectural and urban images were defined by the growing demand for ‘view’ photography. Hence, the reassuring neo-classicism of Sydney’s mid 19th century architecture coupled with the often spectacular views of the harbour and the natural wonders around the area are rendered by Bayliss with almost painterly attention. Utilising large-plate negative cameras imported from Europe by Holtermann, Bayliss photographed each building and panoramic view with a compositional care that gave these sites a sense of monumentality and importance, regardless of their status. This approach had a slightly propagandistic edge to it, as the Bayliss images were used in Holtermann’s ‘International Travelling Exposition’ which toured USA and Europe between 1875 and 78 in order to attract more settlers to Australia.

Thus, Bayliss appears as a photographer decidedly of the moment. Fully aware of the potential of the medium to conjure up a sense of place, his photographic surveys are tightly constructed and mediated views with sparing but clever use of detail. It is this distilled quality of space in Bayliss’s photographs, which Helen Ennis has qualified as ‘the space of modernity.’ ii