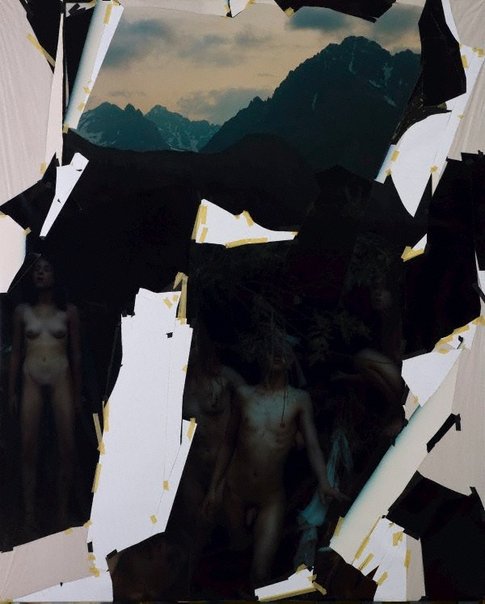 In the late 1980s Henson began to explore a new way of presenting his photographs. Instead of creating one work composed of sequential images, he 'internalised' these multiple elements into one picture. In 1987 he produced his first large-scale 'cut-screen', using the subject matter of the metropolis with its nightlife and violence, its cold neons and implicit despair. The beauty of these images is disrupted when they are cut; they are then pinned and taped onto plywood screens. Most of the works are composed of a life-size central image surrounded by fragments of other photographs, often taken at different times or in different locations.
Henson continued to explore this way of working in his Untitled 1993 series. Here he takes the raw facts of contemporary life (a wrecked car and suburban youths in a semi-scrub, semi-tip site on the edge of town) transfiguring the ordinary into intense and darkly dramatic images. As an intrinsic part of these compositions translucent glassine paper is stretched over a plywood screen forming a ground on which cut photographs and jaggedly shaped black photographic paper are arranged. The glassine has a distinctive off-white colour and texture that reverberates against the other pictorial elements.