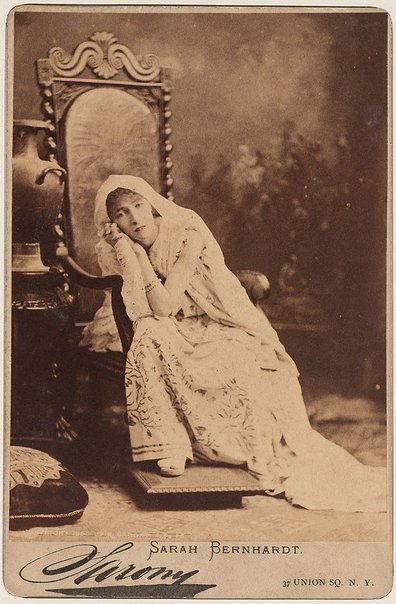 Sarah Bernhardt’s rise to fame as the greatest dramatic actress of her time coincided with the mass production of the celebrity portrait. Her 1862 theatrical debut in Paris came only a few years after the advent of the ‘carte-de-visite’: a small, cheap portrait format which made photography available to the masses. Studio photographers like Napoleon Sarony were quick to seize on the business opportunities presented by this innovation, producing innumerable portraits of actors, actresses, politicians and even royalty, to satisfy the new fascination with celebrity.

Sarony, showing the business acumen typical of many studio photographers, paid $US1500 for the exclusive rights to make and market images of Bernhardt.1 Born in Canada in 1821, he founded a lithographic firm in New York City in 1846. Following the boom in photography, Sarony opened a studio in Birmingham, England, in 1856. He returned to New York in 1864 to specialise in theatrical portraits where the rush of business sometimes oppressed him: ‘All day long I must pose and arrange for those eternal photographs. They will have me. Nobody but me will do; while I burn, I ache, I die, for something that is truly art. All my art is in the photograph I value as nothing.’2

This portrait of Bernhardt was taken in Sarony’s New York studio around 1880, when she was conducting a world tour of Europe and America. The ‘Divine Sarah’ was lauded for her dramatic performances of Phèdre, Adrienne Lecouvreur and Camille, and she was often photographed in these roles. Sarony’s studio, like many of the time, was filled with props, furniture and draperies which allowed him to re-create the settings of his client’s most famous roles. The Grecian urn and Bernhardt’s classically styled draperies suggest that she is posed as the eponymous heroine of Racine’s Greek tragedy, ‘Phèdre’.

Browse other works by Napoleon Sarony