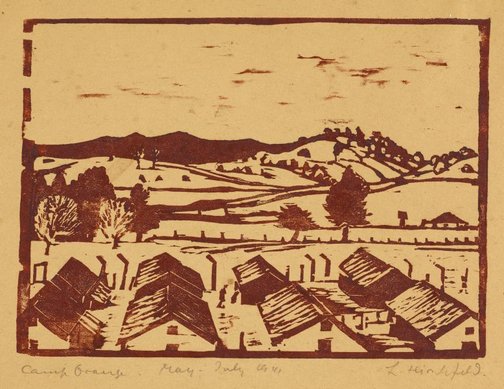 In 1940 the Dunera, a ship carrying 2,000 German and Italian internees arrived in Sydney from England. Among those on board were prominent intellectuals, artists, craftsmen and professionals, most of whom had fled Fascist and Nazi persecution in their own countries, only to be perceived as an alien threat when they arrived in England. The majority were transferred to interment camps in Hay, then Orange in New South Wales and Tatura in Victoria, where they were imprisoned for almost two years.

Many internees sought solace in intellectual and creative activities and both professional and amateur artists, such as Max Cohen and Kurt Winkler, made art in the camps. There was much discussion and exchange of ideas among the men, as well as more formal classes - Hirschfeld Mack taught colour theory at Orange, while sculptor Heinz Henghes discussed his own sculpture and international contemporary art with others.

Ludwig Hirschfeld Mack was the most highly trained artist amongst 'The Dunera Boys', as the internees came to be known. He had studied at the Bauhaus in Germany between 1919 and 1925 and while interned made monotypes, watercolours and drawings based on this training. Hirschfeld Mack made a number of evocative woodcuts of the camps that forcefully expressed the alien conditions and landscape in which the prisoners found themselves.

Browse other works by Ludwig Hirschfeld-Mack