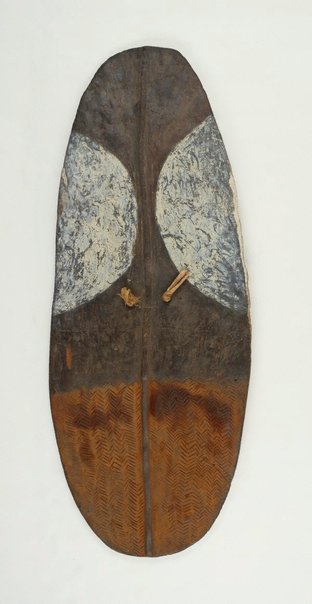 Prior to the arrival of Europeans, warfare between Mendi tribes and clans was rife. Wooden fighting shields were commonly carried in mass battles, where fighters decorated their bodies with oil, paint, feathers and leaves. The 'wörrumbi' was carried by bowmen in open lines of combat. Carved from a solid piece of hardwood, and slung from the shoulder by a strap threaded through the centre of the shield, the 'wörrumbi' was very effective against bone-tipped arrows and spears.

'Wörrumbi' shields are noted for their distinctive ridge or 'mesha' (spine). This forms a central axis for pecked, incised and painted forms that symmetrically cover the surface. The designs are believed to represent anthropomorphic figures and they are typically coloured with red ochre and white mineral pigment traded in from the west. This shield also has two small holes at the top to which bird plumes were secured.

Australian anthropologist D'Arcy Ryan, who first undertook research in the Mendi region in 1954, noted that most 'Wörrumbi' shields are covered with incised scoring that are generally coloured red and might indicate skin and body hair.