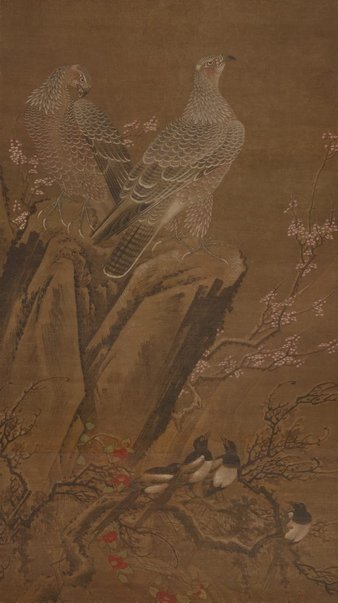 In this large painting, two eagles stand proudly atop jutting rocks, their eminence emphasized by the branches of blossoming plum that surround them. On a snow-covered branch below perch four magpies, three looking upward toward the eagles. Bright red camellia flowers add dots of color to the scene to give it a liveliness. In the background are scenes of a mountain and running stream which one of the eagles seems to be listening to. The scene embodies the idea that when a wise leader listens to the admonitions of his trusted advisors, represented by the eagles and magpies respectively, the outcome will be favorable. Thus, the painting most likely was designed for the use at court, commissioned by the emperor or some court official.

Although the name of the artist is yet to be discovered on the painting, the style of the painting is related to works by Lin Liang 林良(ca.1430-ca1490) and Lu Ji吕纪 (ca 1440-ca.1505), who were the major artists active at the imperial court during their lifetimes.

The composition is very well balanced, and the brushwork is sharp and lively with rocks given texture by broad “ax-cut” strokes with the brush held at an angle to the silk.

The genre of painting flowers and birds is an intimate realm of traditional Chinese painting. It is another manifestation of Chinese artists’ desire of communing with nature. On the surface, it is the art of depicting fragments of nature’s beauty. However, the motifs chosen by artists bear deeper symbolic meanings in myth, religion and popular culture.