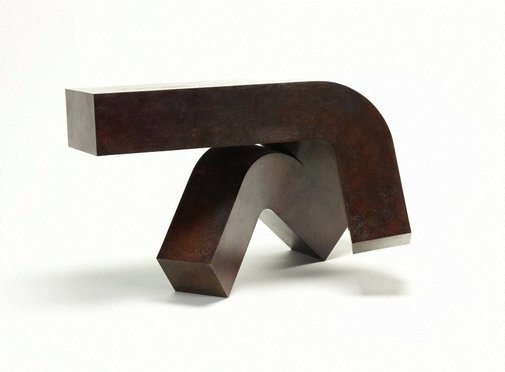 One of Australia's most significant modernist sculptors, Clement Meadmore's work is characterised by its dynamic energy and sheer presence. It displays arresting rhythm and movement, which is effectively emphasised against the robust physicality of his structures. Line and mass are intrinsically related to create a sense of weightlessness, despite the monumental reality of Meadmore's forms.

After studying engineering and industrial and furniture design in Melbourne during the late 1940s, Clement Meadmore began producing abstract carved wood and wire sculptures in the early 1950s before developing major welded metal forms in the late 1950s and early '60s. These sculptures were influenced by the gestural vocabulary of abstract expressionism and signalled, like the work of various local painters, a wider Australian transition from European to New York School abstraction.

Meadmore's early encrusted rod constructions gave way to heavy, textured slanar constructions, composed in angled assemblages, which spoke not only of Cubism, Mondrian and the modernist grid, but the nascent movement and expressiveness which is held, surprisingly, within Meadmore's heaviest and most monumental forms.

Living as an expatriate from 1963 in the USA, Meadmore developed a reputation as an artist who attempted a fusion of gestural expressionism with its seeming counterpart, minimalism, grew as his works matured. By the late 60s, after a brief period of quite static minimalist forms, he began to create sculptures in geometric modules by combining and recombining two basic elements - the cube and quarter-circle, frequently in single rectangular volumes - which twisted and turned in upon themselves in space. Often seen in terms of an amplified minimalism, such forms transcend geometry in their capacity to express larger rhythms and prompt emotional responses - and were further developed in a wave of monumental sculptures created for public spaces across America over the 1970s and 80s.

Exemplary of his 1980s practice, 'Overhang' fuses characteristics of his earlier single- and multiple-form works. Discrete modules are combined to form a complex, yet unified sculpture from which individual elements radiate and bend. The work encapsulates the compositional problems Meadmore explored during the 1980s in his shift from a mode of sculpture that was primarily linear to one featuring broad planes. Characteristic of his work at this time, 'Overhang' oscillates between a sense of motion and stillness.

Browse other works by Clement Meadmore 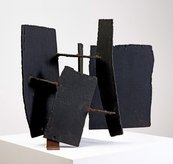