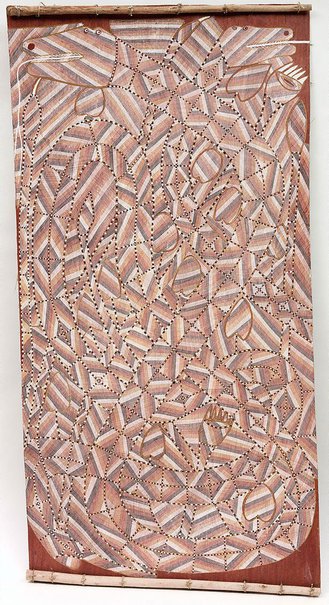 Ngalyod, the Rainbow Serpent, is an iconic subject matter that is represented by all the important artists from western Arnhem Land. Kunwinjku use the term 'Rainbow' to refer to two distinct Ancestral Beings. One of these, Yingarna, is described as the original Creator Being, who is said to have androgynous qualities. In some stories, Yingarna's first-born is said to be a Rainbow Snake called Ngalyod whose sex is equally unclear. Kunwinjku tell how Yingarna, the most powerful and original creator, held all the original Ancestors or Dreaming inside her body until she was speared to let them out.

In 'Ngalyod Rainbow Serpent' 2002 James Iyuna has completely covered the field of the bark painting with intricate cross-hatched patterns. Two outward-looking heads dominate the top of the painting representing aspects of Ngalyod's character. The serpent's intertwined bodies are delineated by thin lines of yellow ochre that have been dotted with alternate black and white dots in reference to men's body painting for the Mardayin ceremonies. Waterlily leaves are also scattered across the painting representing the wetlands that Ngalyod inhabits.

Iyuna is one of four brothers living at Mumeka, an isolated outstation situated on the Mann River in the Arnhem Land escarpment that stretches along the southern extremity of Arnhem Land from Kakadu to Maningrida. Iyuna's other brothers are John Mawurndjul, Jimmy Njiminjuma and Bandawunga. Their father did not paint either on rock or bark. Their uncle, the prominent bark painter Peter Maralwanga, taught the brothers bark painting techniques. All four brothers have subsequently achieved fame as bark painters.