The agony of flowers 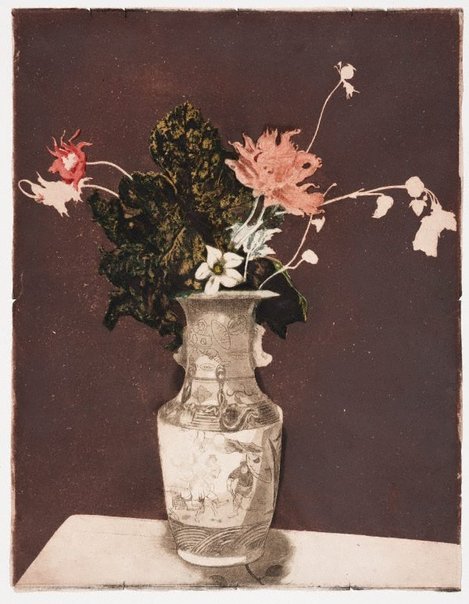 Born in Lorient, Brittany, Roussel gave up a military career after being called to active duty in the Franco-Prussian War. He decided to become an artist and, with this ambition in mind, moved to London in around 1877 where he established himself in Chelsea, painting and exhibiting charming park and street scenes, as well as portraits. In 1885 his paintings came to the attention of Whistler and the two artists became friends. The Australian-born Mortimer Menpes, one of Whistler’s devoted band of followers, recalled in his book, Whistler as I knew him (1904), that Roussel always went bareheaded in the leader’s presence as an act of deference, in response to which Whistler chirped, ‘At last, I have found a follower worthy of the Master’.

In 1887 Whistler persuaded Roussel to take up etching. His early prints, drawn on small copper plates and recording the shopfronts and houses of Chelsea, are essentially Whistlerean imitations – right down to the trimmed margins and projecting paper tab for the signature. However, from the 1890s onwards Roussel gradually revealed himself as a strikingly original printmaker, moving away from Whistlerean subjects and techniques, and immersing himself in the latest developments taking place in Paris, namely in colour etching.

Although in this period the original print was still understood as a black and white medium, isolated trials in colour etching were starting to challenge this idea. Through the 1890s colour etching developed apace, becoming an increasingly important branch of printmaking, among whose exponents were such figures as the Impressionist artists Camille Pissarro and Mary Cassatt.

Colour etching was a more complicated and time- consuming process than traditional etching because the image had to be built up from separate plates for each colour. By comparison with other forms of colour printmaking, most notably lithography (which was flourishing in tandem with the rise of the commercially produced poster), colour etching was perceived as the more elite art form, more likely to appeal to the sensitive connoisseur with its aura of handcrafted individualisation.

Roussel lavished extraordinary attention on his plates. He was intrigued by the vicissitudes of printmaking, which led him to produce countless trial proofs, exploring the changes that could be manifested from one impression to another. The print that had the longest and most complicated gestation was The agony of flowers, a work deeply redolent of fin-de-siècle Symbolism, depicting a bouquet of dying flowers in a Chinese vase, and unquestionably the artist’s masterpiece.

Roussel began work on the plate, his most highly wrought and largest to date, in the early 1890s, giving free rein to his painterly approach by combining the auxiliary processes of softground and aquatint with traditional linear etching. The plate was printed in black and white (see 5.1981), with Roussel obtaining the remarkable depth of shadow through the unusual operation of inking and printing the plate twice. He also experimented with alternative inksand papers, as seen in the Gallery’s impression printed in gold ink on black paper – the only known example of this strikingly beautiful combination (see accession number 264.1982).

Roussel first developed the composition of The agony of flowers in 1890s. Yeras later, he returned to the composition and translated it into one of the superlative colour etchings of the period, creating seven new plates from which the print would ultimately be assembled. He finetuned the image through a number of proofs: four such impressions, recording different stages of elaboration and colour combinations, are in the Gallery’s collection. Less than 20 proofs are recorded in total yet, surprisingly, only two ‘finished’ impressions are known to exist (British Museum, London and National Gallery of Art, Washington).

Théodore Roussel
The agony of flowers

Browse other works by Théodore Roussel