A print from Johnny Fawkner's press 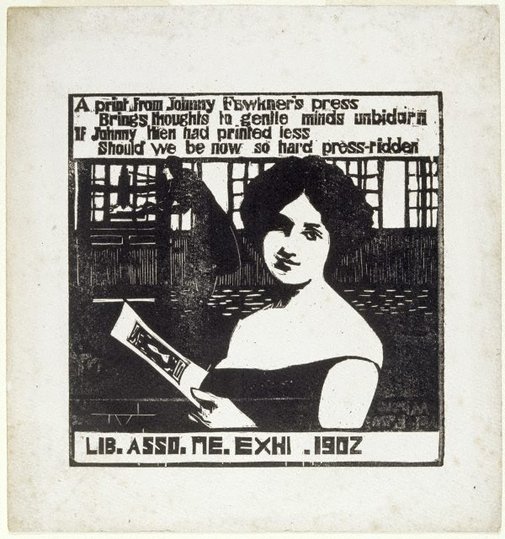 Blamire Young was born in Yorkshire. He studied at Cambridge University and with Hubert Herkomer at Bushey near London and arrived in Australia in 1885 to teach at Katoomba College in the Blue Mountains, NSW. He established a studio there, and formed friendships with a number of artists and writers, including Phil May. In 1893 his studio burnt down, precipitating his decision to return to England to pursue a career in art. He worked briefly with the Beggarstaff brothers (William Nicholson and James Pryde), who produced posters in London; he may have learned relief printing using wood blocks from Nicholson. He returned to Australia in 1895 and worked with Lionel Lindsay, Norman Lindsay and Harry Weston, making posters using lino and wood blocks, and lithography. He is best known for his watercolours.

This and another woodcut 'A print from the press of Fawkner' (also in the Gallery's collection) was printed for the Library Association of Australasia's Loan exhibition of rare books, manuscripts, and literary and historical curiosities at the Melbourne Public Library in 1902; 'It was a happy idea of Mr Blamire Young to cut a couple of woodblocks and distribute copies of "a print from Johnny Fawkner's press" as mementos of the exhibition' ('Transactions and proceedings of the Third General Meeting', Melbourne: Library Association of Australasia, 1902, p.124). Both were printed on the press of John Pascoe Fawkner (1792-1869) in the Melbourne Public Library, now in the collection of the Museum of Victoria. This press produced the first newspaper in the Port Phillip district, 'The Melbourne Advertiser' in the late 1830s and had previously been used in Tasmania. The two prints are among the first major examples of woodblock printing in Australia.

Browse other works by Blamire Young 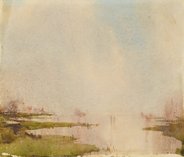 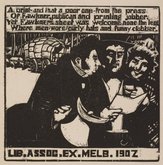 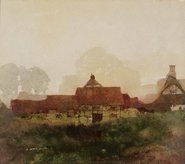