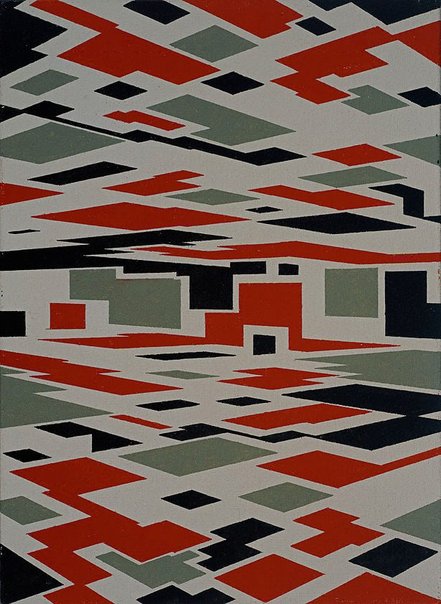 When Stephen Bram combined representational and abstract elements in ‘Untitled (two point perspective)’, he engineered a clash between two very different perceptual systems. For much of the post World War II period, American critic Clement Greenberg’s teachings had dominated modern art. Greenberg determined that artists should celebrate the two-dimensional aspects of space (flatness) and deny all forms of illusion in painting. For good measure, he decreed that elements such as subject matter, connection with the artist, and definite brushstrokes should also be abandoned. When the neo-expressionism of the early 1980s reacted against this by reintroducing figuration and narrative, abstraction seemed irrelevant (see chapter 3). Stephen Bram, however, was one of a small group of artists (also including Melinda Harper, Rose Nolan and Kerrie Poliness) who set up Store 5 in 1989, an artist-run exhibition space in Melbourne which reinvigorated abstract painting in Australia.

Bram’s paintings happily accommodate a mix of representational and abstract forms, with neither mode dominant nor dependent on the other. His ‘architectural’ paintings typically consist of hard-edged abstract shapes in a limited palette, in this case confined to light grey, green, red and black. While the flat areas of colour align with the picture plane, the shapes are formed by the orthogonal lines of perspective, creating in a flat abstraction the contradictory sensation of depth. In an interview in 2004 Bram noted that ‘You can see each work in two different ways: as illusionistic – a space you’re drawn into – but you can also see it as a flat surface in relation to the space it sits within’.1

The title of this work, ‘Untitled (two point perspective)’, is generic and was applied to all 18 of the paintings he exhibited at the Anna Schwartz Gallery in Melbourne in 2005. As the title indicates, Bram’s paintings differ from the work of earlier abstract artists in the application of a perspective in which all lines converge on two distinct vanishing points outside the painting. ‘One of the things I am most interested in – is the articulation of the relationship between the interior of the work and the space it’s in’.2

The appearance of architectural interiors in Bram’s work derives from our recognition of the conventions for describing space in two dimensions developed by Filippo Brunelleschi during the Renaissance and refers to the architecture of high modernism, which was claimed as the ultimate and logical end product of that rationalist imperative. Bram’s spatial matrix evokes both the confident certainties of the modernist environment but also, as the foundational geometry of the perspective grid fragments and disintegrates, the postmodern ambiguities of the present day.