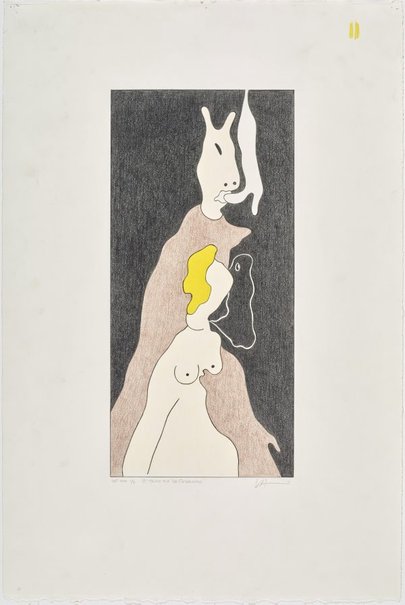 Brent Harris was born in New Zealand and has lived in Australia since 1981. A painter, printmaker and draughtsman, Harris has developed a distinctive personal visual language where his works dwell somewhere between abstraction and peculiar figuration, incorporating elements of the surreal, such as automatic drawing and uncanny distillation of the figure. Immaculate surfaces, pristine edges and cropped forms are dominant features of his works.

Harris works methodically, often using a sequence of paintings, prints or drawings to zero in on an idea, a form or to determine a composition. Drawing is at the core of his artistic practice, he makes many drawings, continually refining forms and images before creating finished paintings. Behind the pristine refinement of his works are accumulated layers of experimentation and many drawings.

The Grotesquerie series of twenty-six paintings, four suites of prints and over 100 drawings, were worked on over an eight-year period from 2001-2009. The series conveys an intense atmosphere through a sequence of dramatic and unsettling scenes populated by mysterious part-human, part-animal figures. These works are an eerie rendering of personal trauma and family dysfunction. In making the series Harris created many drawings in preparation for the paintings, this drawing shows his working process and relates directly to the development of the painting held in the collection of the Art Gallery of New South Wales Grotesquerie 1, 2001.