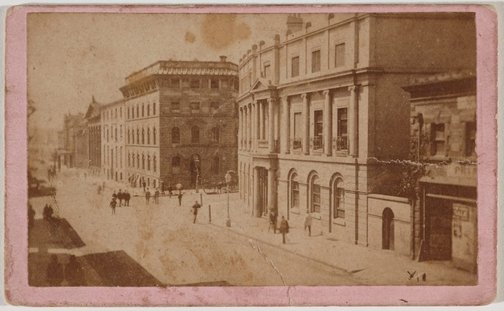 Olaf William Blackwood (known as William) was a successful professional photographer of views and panoramas in Sydney. By 1858 Blackwood had established a photographic studio in East Sydney and commenced photographing streets and buildings in the city using the collodion wet-plate process. These views included the intersection of Bridge and George Streets, the site of the first photograph taken in Australia in 1841. The views were not only the largest photographs thus taken, but acknowledged to be ‘faultless’ and ‘super-excellent’ by the 'Sydney Morning Herald'. In the same year took Blackwood took a series of photographs of Sydney and its harbour from the roof of Government House, which was combined into a panorama. While not the first panorama of Sydney, it was judged by the press to be superior to that taken by the Freeman Brothers two months earlier. Blackwood followed the panorama with an album of views of Sydney’s nine banks and photographed the University of Sydney in 1859 at the request of architect Edmund Blacket. Blackwood also introduced the carte de visite to Sydney in 1859, a photographic format that soon became ubiquitous within the colony as elsewhere.

Browse other works by William Blackwood