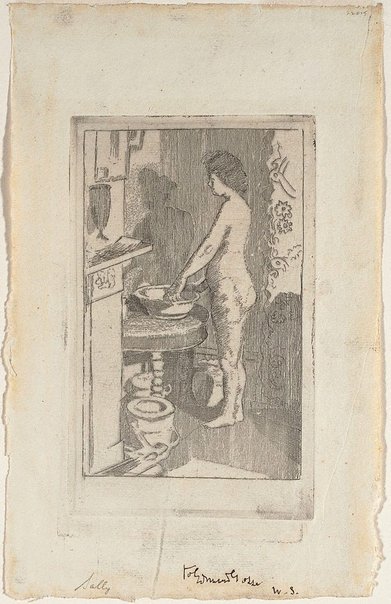 Of all the artists who were part of the British Etching Revival of the early 20th century, Walter Sickert is the most original. He began his career as an assistant of Whistler and later came under the influence of Degas in Paris. In 1905 he returned to London and set up a press in Camden Town. At this time the Camden Town Group of painters was also developing under his leadership. His preferred subject-matter was that of cockney music-halls, figures in seedy domestic interiors and scenes of everyday working-class life.

Sickert's etchings were experimental and unusual for their time - in technique, style and subject-matter. He scorned the views of the contemporary etching scene such as the idea of the limited edition and that each impression should be unique. He also disliked artistic inking and wiping effects (exemplified by Whister and his disciples), and claimed that etchings ought to be "printed like visiting cards" in a mechanical process of multiplication.

'Sally' is one of six recorded proofs in the third state. The difference between the present impression and those of the fourth state is that they include lettering: signature, title and publisher's details.

The print shows a nude young woman standing washing her hands in a basin at a wash-stand. On the floor stands a waste bin. The nude stands in outline against a dark wall where her shadow is reflected. There is a chimney piece at left with a vase on the mantel shelf. It is a quiet and subtle work but full of atmosphere. The evocation of light and shadow in the interior space is especially appealing.