The Boney twins at Doreen McHughes wedding, Brewarrina, from the series Brewarrina 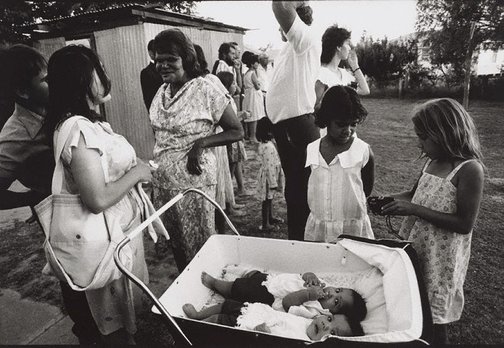 In the hands of Sandy Edwards, photo-documentary is both deeply personal and clearly political. Her work, including her portraiture, is based on close observation, made possible by the development of trust between the photographer and her subject. Of this, she has said: ‘The role of a documentary photographer is a difficult one … For me it is necessary to have some degree of intimacy with the person I am photographing.’1

Edwards is an engaged practitioner and has written in substantial ways about her practice, its development and context, and the role of photo-documentary. She has consistently brought a level of social awareness to her work with a particular commitment to the representation of women fostered by her involvement with the Women’s Art Movement and the Sydney Filmmakers Co-op in the 1970s. Edwards has worked as a freelance photographer since 1977 and was involved in such commissions as the CSR Photography Project in 1978, where her sequences are evocative of a range of social issues, including the monotony of women’s work and the challenges of cultural difference in the workplace. She was also involved in the ‘After 200 years’ project in 1988, where she worked with the Aboriginal people in Brewarrina, New South Wales, on a representation of their community and culture. ‘The Boney twins at Doreen McHughes wedding, Brewarrina’, compelling in its capture of the dynamic of an extended family gathering, is from this series. Edwards has described these photographs as ‘mostly a form of informal portraiture … [documenting] the strong family life and other social connections apparent through the Brewarrina community … [combined with] other more political issues.’2