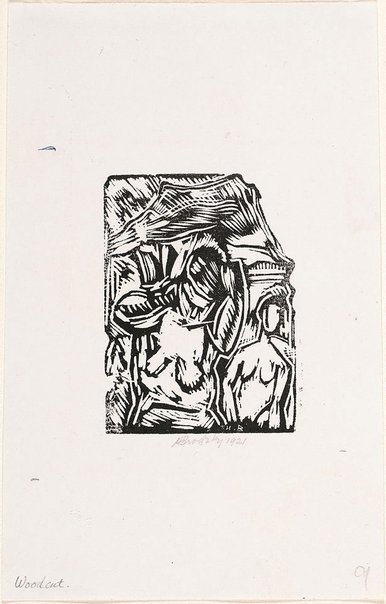 Horace Brodsky was born in Melbourne, where he worked for his father's journal 'Table Talk' and studied intermittently at the National Gallery School. He left Australia with his family in 1905 and spent most of his career in the England, apart from a time in New York (1915-23). In England he joined the London Group in 1914 and was associated with the British avant garde. He was the subject of a famous portrait bust by Gaudier-Brzeska (Tate), with whom he was. particularly close and on whose work he wrote a book.

Brodsky's principal strength as an artist lay in drawing, prints and design. He was the pioneer of linocut printmaking in Britain and his prints are a strong and important aspect of his oeuvre. His prints were included in an early monograph ('A portfolio of linoleum cuts by Horace Brodsky', New York: Egmont H Arens, 1920) and shown in Claude Flight's 'First exhibition of British linocuts' (London, 1929).

Purchased with funds provided by the Australian Prints, Drawings and Watercolours Benefactors' Fund 2003

Browse other works by Horace Brodzky 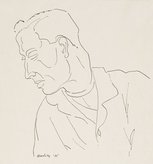 Horace BrodzkyHead and shoulders of a man facing left 1935DB2.1965