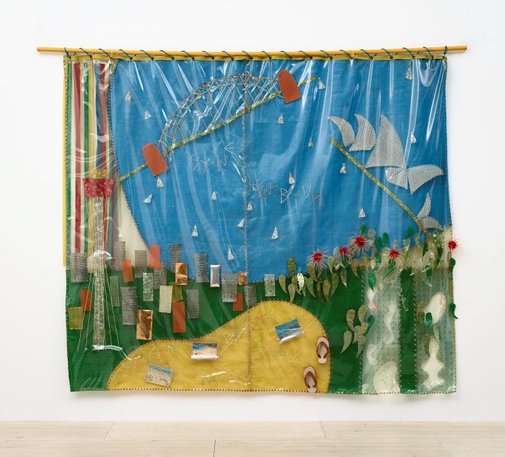 'Sydney curtain' 1977-78 is from a group of plastic and collage works McDiarmid made in the late 1970s which emulate suburban craft practices. In these large suspended 'curtains' McDiarmid explored a camp aesthetic and in some an openly gay sexual identity while homosexuality was still illegal in Australia. 'Sydney curtain' is from the former group and is a joyfully and deliberately kitsch celebration of its namesake city, with collaged postcards of beaches, plastic thongs and gum leaves, a bright blue harbour and images of such iconic local buildings as the opera house, harbour bridge and Centrepoint tower.

The first simpler version of this work was the centrepiece of McDiarmid's 1977 exhibition Australian dream lounge at the Hogarth Galleries, Sydney. This exhibition celebrated the camp retro banality of suburban Australian interiors. McDiarmid reworked the curtain into this more elaborate version for the exhibition New Works by David McDiarmid and Peter Tully at Hogarth Galleries in 1978, and its celebration of Australiana clichés shares the same irreverent humour as the work of McDiarmid's close friends and often collaborators Linda Jackson and Jenny Kee from the Flamingo park fashion label, and artist Peter Tulley.