Still life with pears and grapes 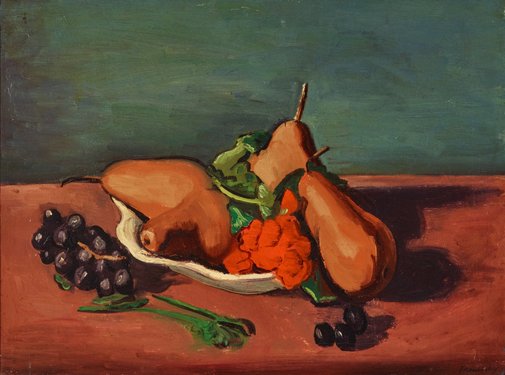 Although his artistic talent has never been fully appreciated, neither in his lifetime nor since, Bernard Meninsky was a rare visionary power devoted to teaching. Born in what is now considered the Ukraine, to Jewish parents, Meninsky was raised in Liverpool where he attended the Liverpool School of Fine Art and won a scholarship to the prestigious Slade School of Fine Art in London.

At the outbreak of World War I, Meninsky joined the Royal Fusiliers and fought in Palestine, however, after becoming an official war artist Meninsky was discharged due to a nervous breakdown. Such mental illness remained in the artist’s life until his suicide in 1950 and can be seen to have hindered and caused much of his great insight. After recovering, Meninsky became a teacher at the Central School of Arts and the Westminster School of Art in 1920, succeeding the English Impressionist painter Walter Sickert as the teacher of life-drawing. As an artist Meninsky produced eerie and impressive landscapes in the 20s and 30s, as well as a distinctively tender Mother and Child series and in his later years his works reflected a magical pastoral vision.

Despite his reputation as an outstanding figure draughtsman, critics have struggled to classify Meninsky, and the common description of him as a Neo-Romantic fails to address the spirit his works share with Picasso and Matisse. Although Meninsky was central to a great generation of Anglo-Jewish artists, it is perhaps his repute as a teacher that caused his abilities as an artist to go largely unacknowledged. (EF)

Browse other works by Bernard Meninsky 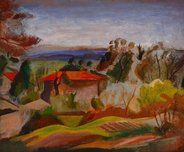