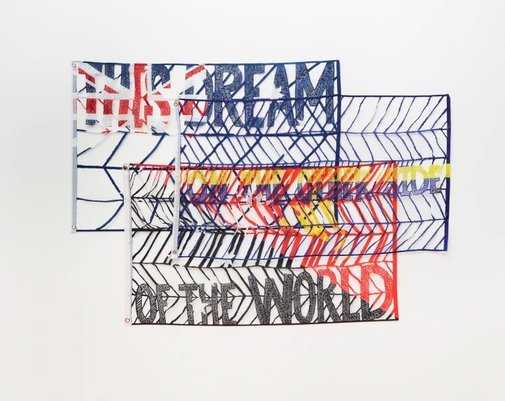 Raquel Ormella works at the intersection of art and activism, investigating political consciousness and social action through her practice. She interrogates the ethical roles and responsibilities of the artist, producing work that is reflexive and critically self-aware. Employing a diverse range of media - including video, painting, installation, drawing and zine production - Ormella extends her studio practice to explore modes of collective and collaborative art production. She leads the viewer to become implicated in and challenged by her work; a notion which is ultimately aligned with the broader social concerns that underscore her practice.

'This dream' evolved out of an ongoing enquiry into identity and nationhood, and the way that meanings associated with flags may be changeable. The work is comprised of the flags of Australia, Nauru and Papua New Guinea, which have been altered and re-presented by the artist aligned with her ideological investigation. The flag - a symbol of a country, and moreover of its system of beliefs and values - is assumed by the artist in this work as a powerful visual signifier of nationalism; however, her treatment of each flag opens it up to new possibilities of meaning. Each flag has been manipulated by the artist to create words and patterns in the fabric. The charred edges of the fabric - evincing Ormella's method of burning its fibres - reference flag desecration as an act of political activism and protest against a country or its policies.

'This dream ... on the other side ... of the world' is the simple text that can be read across the flags, alluding to the plight of asylum seekers and refugees who have left their country of origin due to a fear of persecution. It speaks to the domestic politics of Australia, but also to the effects of war and globalisation, as well as the possibility that Australia holds for those seeking refuge. This text, together with the artist's selection of these particular flags, is suggestive of the so called 'Pacific Solution' and the Australian government's ongoing diplomatic negotiations with the governments of Nauru and Papua New Guinea in relation to asylum seekers.

Browse other works by Raquel Ormella 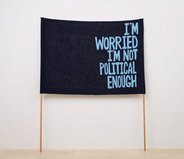 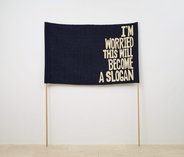