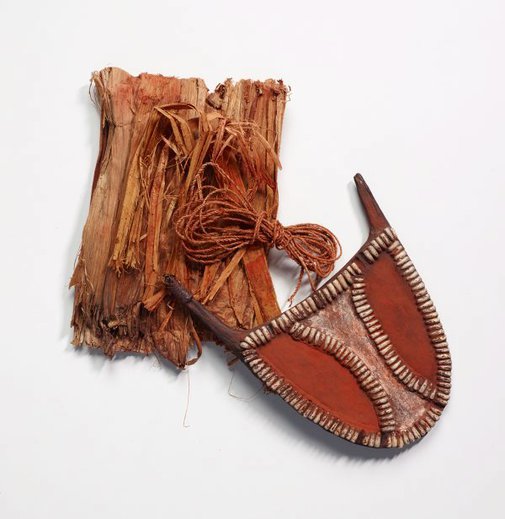 The 'sombti' is a wooden, crescent-shaped object which accompanies the highly valued 'somb'. In former times the 'somb' was kept as an item of prestige - a symbol of clan unity and social solidarity amongst the Mendi of the Southern Highlands of Papua New Guinea. The 'sombti' is not as valuable as the 'somb' itself and is made only to decorate the 'somb'.

Those involved in making the 'sombti' and decorating the 'somb' are each paid when the 'somb' is sold, even though they may not have contributed to the purchase of the 'somb'.

Somp, worn by leader of a clan

© Mendi people, under the endorsement of the Pacific Islands Museums Association's (PIMA) Code of Ethics

Theodore Mawe, Mendi culture and tradition: a recent survey, Port Moresby, 1985, 32-41. General description of the 'somb' and 'sombti' as used in traditional Mendi rituals. Plate no. 1 shows a 'momak somb' and 'sombti' in the collection of the National Museum of PNG: Catalogue numbers 83.45.46 and 83.45.47