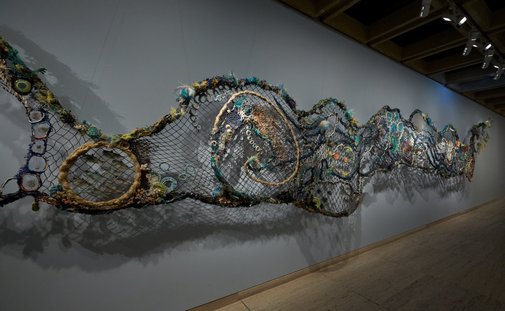 Erub Erwer Meta (Darnley Island Arts Centre) is located on Erub or Darnley Island in the eastern Torres Strait. Artists at the centre work in diverse media, with a particular focus in recent times being provided through the use of ghost nets to create sculptural forms. This method of working was instigated by Ghost Net Australia who travelled to the island in 2010 as part of a larger project across the far north of Queensland that aimed to collect the vast numbers of discarded fishing nets that had washed up on the beaches and use these to create artworks. The artists are Erub have since become known for this animated forms of the variety of sea life found in the region.
Solwata translates as ‘saltwater’ and this was the inspiration for ‘Solwata’ 2016. This large scale collaborative work gives imaginative form to the saltwater reefs, tidal areas and shorelines of the Torres Strait. The work was commissioned from the Torres Strait Islander artists Florence Mabel Gutchen, Racy Oui-Pitt and Ellarose Savage, in conjunction with the Cairns based artists Marion Gaemers and Lynnette Griffiths for the 2016 Biennale of Sydney, The future is already here it is just not evenly distributed and featured in the ‘Embassy of Spirit’ at the Art Gallery of New South Wales.