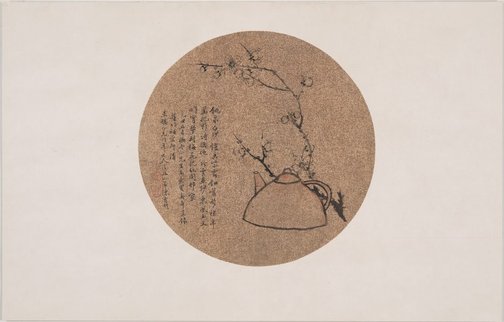 Chen Shouqi (alias Gongpu,Jiexiang, Weiren, style name Zuohai, Meixiu, Yinping Shanren) native of Houguan, Fujian Province, was a scholar of Chinese classics and also an educator who emphasized the teaching of traditional Confucianism.
The composition of the painting reminds one of the story of You Yin (1732－1812)’s painting Shidiao Tu , and the story behind it. You Yin managed to obtain a copper teapot once owned by Song dynasty’s poet Su Dongpo, but had to submit it to the emperor. He missed it so much that he asked a potter to copy Su’s Shidiao pot. He also painted many paintings with his pot and sprays of plum blossom to give to people. These paintings had a great impact on later literati painters who admired Su Dongpo, and believed the plum blossom processed the supercilious spirit of a gentleman.