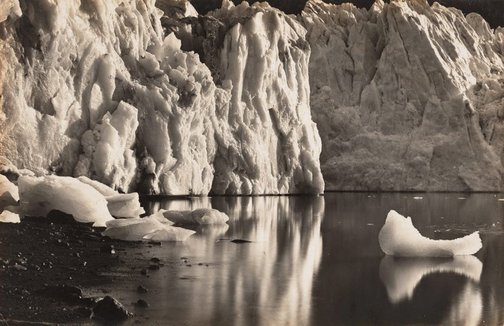 Frank Hurley was a celebrated and intrepid documentarian of Antarctica and the two World Wars. A hobbyist turned professional photographer, Hurley began working in Harry Cave’s postcard business in 1905. He travelled to Antarctica on expeditions led by Sir Douglas Mawson and Sir Ernest Shackleton and in 1917 was appointed the Official Photographer of the Australian Imperial Forces. He photographed military campaigns on the Western Front and in the Middle East during WWI.

Hurley’s photographs of Antarctica remain some of the most resonant and memorable images of the region. They are inscribed with the sensibility and force of the sublime, conveying the power and impenetrability of a then untouched landscape. These photographs bear witness to the relative insignificance of humanity against the might of nature. ‘The crystal canoe’ was probably taken when Hurley accompanied Shackleton’s infamous Imperial Trans-Antarctic Expedition, 1914-16 aboard the ‘Endurance’ that became trapped in ice and sank before the expedition to cross the continent could begin. Against the backdrop of this frozen landscape, Hurley recorded the heroic plight (and survival) of the crew.

Hurley’s ability to coax beauty from extreme and inhospitable conditions also manifests in his war photography. The work he produced during WWI documents the horrors and adversities of armed conflict but possesses compositional refinement. The city of Ypres in Belgium was the site of intense and sustained battles between the German and Allied forces during the war.

Browse other works by Frank Hurley