Gourd-shaped bottle with design of butterflies 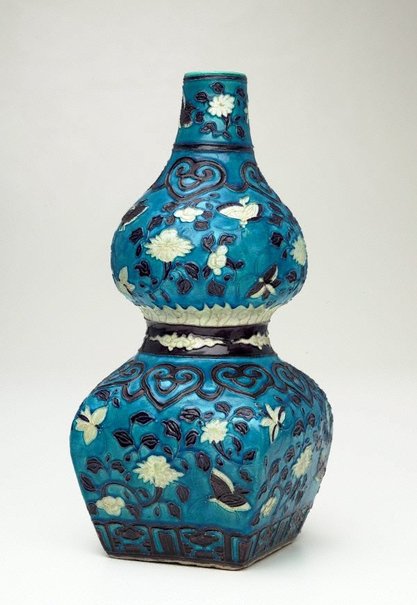 This massive middle Ming 'fahua' gourd-shaped bottle is decorated on four sides with repeated floral butterfly pattern in reserve on a finely crackled turquoise glaze. The neck is decorated with white butterflies alternating with white flowers on leafy stems above a collar of four linked 'ruyi' or wish-granting shapes. Each side of the top bulb is applied with four butterflies hovering in profile or full-winged around a central peony picked out in white. A deep blue band cinches the middle in reserve with white trailing cloud forms, just below an overlapping white petal band. The squared bulb of the gourd is decorated with similar motifs with a central peony surrounded by two butterflies, one predominately white and the other deep blue.

The gourd shape in pottery and ceramics can be traced to Yangshao culture of the 3rd millennium BCE and to the Tang dynasty of the 7th-8th century, yet is appears to be popular during the late Southern Song to Yuan period. The shape of the particular type as seen in this one, with a round top surmounting a squared bottom, reflects the popular Chinese cosmology of a round heaven above and a squared earth below. Hence it won the name of 'tianyuan difang da jiping' (the grand fortune bottle with a rounded heaven and a squared earth). In addition, the term for gourd in Chinese, 'hulu', is also similar to the term for good fortune and richness ('fulu') in pronunciation.

During the Jiajing period, both Shanxi province in northern China and Jingdezhen in the south, were famous for the making of 'fahua' works. What makes the difference of the two 'fahua' ceramic centres lies not only in the fact that the Jingdezhen kiln was directly under imperial administration and produced very fine works, but also on the preference in choosing clay for ceramics. While makers in Shanxi used stoneware, the Jingdezhen crafts employed the kaolin. Judging from the clay of this piece, it was possibly from the Shanxi province.

The Jiajing Emperor was a faithful disciple of Daoism. The imperial partiality sparked a wave of enthusiasm for Daoist religion throughout the empire, and set a fashion in the decorative arts. Motifs relating to Daoism were most favourably employed in the decoration of ceramics of the period as seen in many works. The butterfly depicted on this piece also has Daoist connotations. Zhuangzi, one of the earliest Daoist philosophers in Chinese history is said to have dreamed he was a butterfly. When he woke up, he was not sure whether he had dreamt he was a butterfly, or a butterfly had dreamt he was Zhuangzi: life is an illusion.

Browse other works by Fahua ware