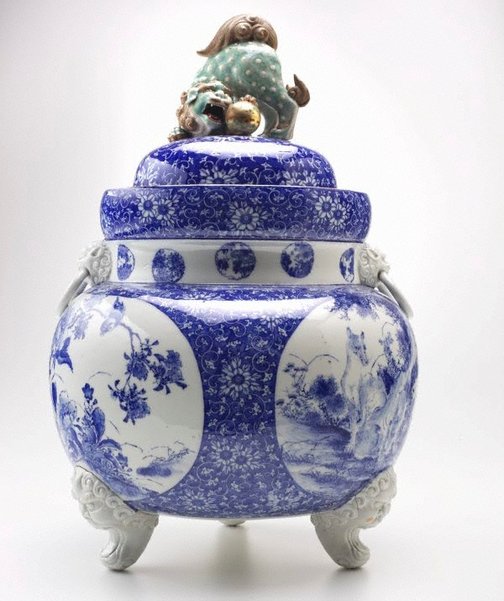 During the Meiji period (1868-1912), following the restoration to the throne of the Emperor Meiji, Japan actively sought international trade. By 1900 almost half of the ceramics manufactured in Japan were produced to appeal to international markets. A maker’s mark on this vessel attributes it to Kawamoto Hansuke, a name used by a succession of ceramic artists working in Seto, Japan in the 1800s. The urn was probably made for export to Europe or America as it is larger and more elaborate than most equivalent objects created for use in Japan. A common motif on Meiji wares, the spotted green ‘fu dog’ or ‘Shishi’ on the lid of this urn is derived from a Chinese composite lion dog associated with protection. The blue and white base of the urn features vignettes of a fox and a crane.

While a discreet display of Japanese art at the first World Fair in London in 1851 attracted little comment, by the time of the 1862 World Fair things Japanese had become extremely popular. The Japanese government then participated in a range of fairs including the Sydney International Exhibition in 1879, the 1900 Paris International Exposition and the World’s Fairs held in America in the late 1800s and early 1900s.

Signed inside cover, in Japanese, inscribed [as a square seal] "Kawamoto Hansuke". Not dated.