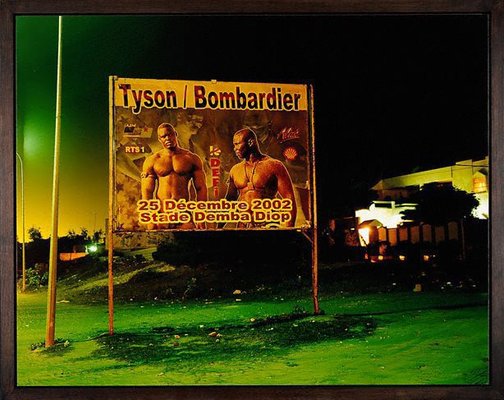 Rut Blees Luxemburg is best known for her images of deserted urban landscapes taken at night using long exposure times with only the surrounding light sources, such as streetlights and neon signs for illumination. 'Tyson/Bombardier' is true to this style. Commissioned by Tate Liverpool and from the series 'Phantom' it was taken in Dakar, Senegal. This intriguing work presents a large billboard advertising a wrestling match between two Senegalese heavyweights 'Tyson' Mohammed Ndao and 'Bombardier' Sérigne Dia. The scene is very atmospheric and saturated with an eerie green light that glows out of the surrounding darkness. 'In my work' she writes 'I try to illuminate the poetics of space and search for the entry points into the psyche of the city, which allow a free-fall into the metropolis of one's imagination. These photographs of Dakar try to articulate the different ways of building and inhabiting a city, and suggest the possibility of a transfer of urban knowledge'.1