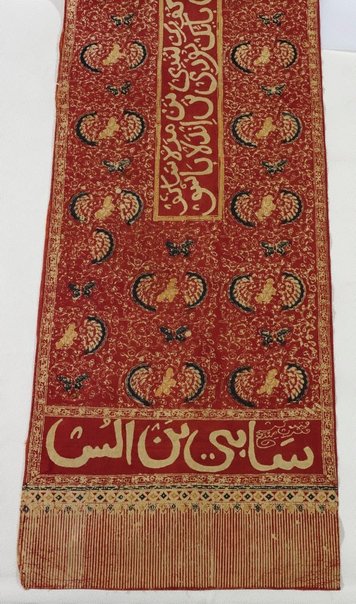 This banner exhibits a peculiar repertoire of motifs that include the garuda wing motif common to batik from central Java and known as the "sawat" motif or "mirong”. In this case the wings are separated and a butterfly has been inserted in between. The butterfly is repeated across the main body of the textile serving as peripheral decoration to the central calligraphic panel. Two other calligraphic panels appear at either end of the banner. There is also evidence that the calligraphy was marked on the cloth before the wax was applied-perhaps by a learned Muslim who had experience writing Arabic calligraphy. Not all batik producers were literate and so many of the textiles that illustrate Arabic calligraphy are in fact non-sensical and serve decorative and talismanic purposes instead. Where women were usually the sole producers of batik, the court of Cirebon was an exception and was known for employing literate Muslim men to do work involving the writing of Islamic texts. Whilst the script on this textile was most likely written by hand ('batik tulis'), the other patterning which resonates with batik produced by the Pasisir communties on Java’s north coast was achieved through the repeated use of a batik stamp ( 'batik cap').