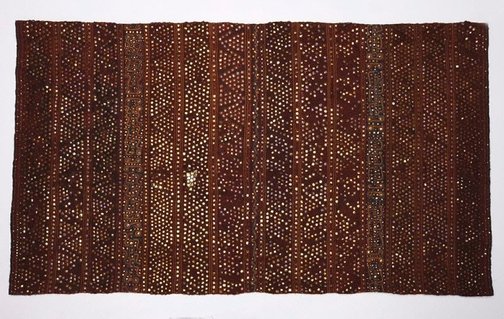 Thousands of little mirror pieces adorn this tapis skirt, creating triangular motifs and flowing lines. In the broad registers, the mirrors are attached to the plain-weave open-work, where there are only brown weft threads, with a blanket embroidery stitch. The warp threads are blue, maroon, and ochre. The three distinct bands of embroidery, which use stem, straight, and split stitch techniques in pale blue, blue, ochre, and maroon yarns, portray fertility symbols. Women on the southern side of the west coast of Lampung made this type of tapis. Although similar skirts have been attributed to the Kauer people of the west coast region, these tapis are not confined to that group.