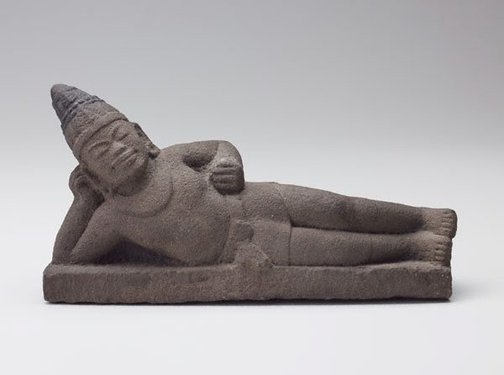 The kingdom of Champa occupied part of what is now central and south Vietnam from the sixth century. Successive waves of invaders - Chinese, Javanese and Vietnamese - destroyed much of the land over which the Champa kingdom held suzerainty until the kingdom itself was eventually destroyed in 1471. In its early phases the kingdom of Champa produced some of the most original art of the region, a unique synthesis of the great traditions of India, China, Indonesia and the Khmers. The sculptor of this classic example of Cham art created a gracefully contained figure which in its minimal decoration, softly rounded forms and distinctive handling of facial features, epitomises the Cham style. The reclining figure is the Hindu god Vishnu, identified by his mitre headdress. It is probably part of a high relief which in its entirety would have depicted Vishnu lying on the serpent Ananta - symbolising the waters of the universe - and the god Brahma, emanating from a protrusion on Vishnu's navel. According to Hindu mythology, when the universe is destroyed at the end of each great time-cycle, Vishnu floats upon the ocean before the new universe starts. Such images, generally showing a lotus rising from the waters or Vishnu's navel, with Brahma on the top of it organising the new universe, were especially popular in South-East Asia. Much Cham art is small in scale. There seems to have been no tradition of large, profusely decorated temples as in India and Cambodia. Art was a royal privilege with temples built mostly on a modest scale for private use.