a) Saturday afternoon at the movies b) Toy figures in front of houses, from the series Visions of childhood 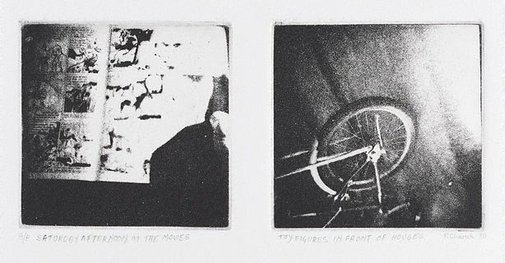 This series, ‘Visions of childhood’ – a hand-bound album of 12 paired black-and-white photo-etchings and the same images shown as diptychs on the wall – is representative of the period when Charuk was exploring photographic processes. As part of this experimentation he used a toy camera as a way to best encapsulate the events and images of childhood – merging form and content in an appropriate way, so that the photographs appear to have been taken from the viewpoint of a child. Like 'first efforts' – my first camera, my first photograph, the sort of memorabilia that ends up in scrapbooks and albums recording the past – the series has none of the sharp, adult ‘matter-of-fact' fullness one expects of documentary photography. Charuk used phrases to title each image, in this case 'Saturday afternoon at the movies' and 'Toy figures in front of houses', however these lead to further imaginative extrapolations rather than providing any narrative explanation.