Head and torso of Kumara 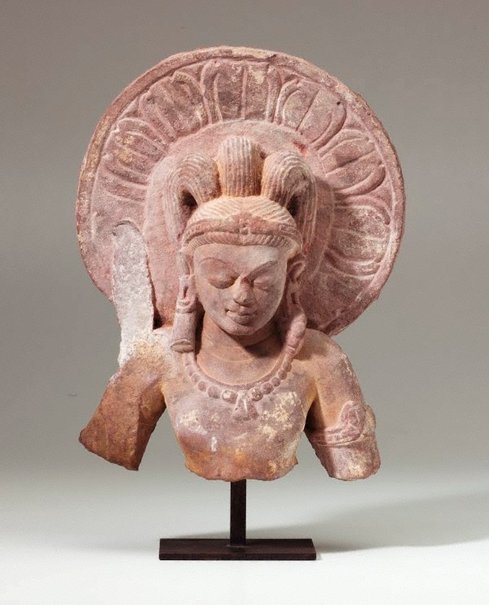 Kumara is a Hindu deity regarded as the second son of Shiva. He is known by many names including Skanda (the Attacker), Karttikeya (Son of the Pleiades) and Subrahmanya (Friend of the Brahmins). This head and torso of Kumara attests to his importance in the North of India during, and immediately succeeding, the Gupta period.

Iconographically, this image can be identified by the distinctive parting of the long hair into three locks, as well as by the unique tiger claw necklace worn as a protective amulet. The word 'kumara' means 'youth' or 'adolescent boy' and hence this deity is depicted as a young boy. The modelling of his body - bare-chested and broad - is simple yet conveys the heroic quality of a deity that was worshipped as a god of war.

Although this image has been dated to c6th century, the influence of the Gupta style (c319-480CE) is still evident. This influence can be recognised in features such as the arching eyebrows, downward looking eyes, and in the shaping of the figure that delineates the body in broad but subtly modelled planes.

Head and torso of Kumara