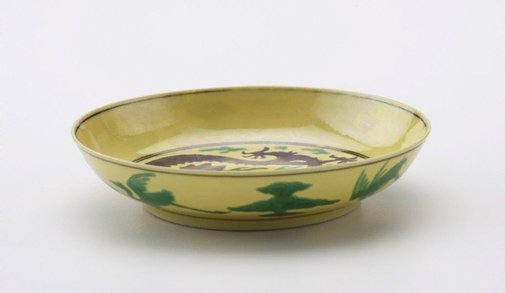 Each dish (Acc.nos. 239.1997.1 & 239.1997.2) is incised in the interior with two scaly 5 claw dragons contesting a flaming pearl amidst clouds and the exterior with alternating crane and cloud pattern. This type of design was manufactured in considerable quantities throughout the Qing dynasty and must have been widely used in the imperial household. Although the colour 'yellow, green and aubergine' combination was not mentioned in the 'Palace Regulations of the Qing Dynasty', this design could be used by the emperor, the empress dowager or the concubines of the top four ranks whom the yellow-ground colour was designated.'