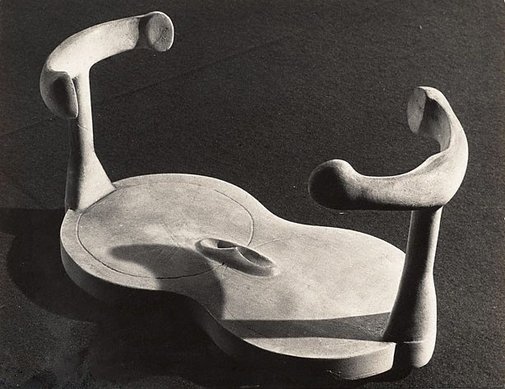 The son of Russian-Jewish immigrants, Man Ray spent most of his early life in New York. After graduating from high school Man Ray pursued a career as a painter, setting up a studio in his family’s home, whilst earning money as a commercial artist. During this time Man Ray frequently visited Gallery 291, developing a friendship with its founder Alfred Stieglitz who introduced Man Ray to many aspects of modernity and avant-garde developments in art. Man Ray began using photography largely to document his artwork, and that of other artists whilst also engaging in portraiture.

His friendship with Marcel Duchamp, whom he met in New York in 1915, was to have a significant influence upon his development as an artist. Duchamp introduced Man Ray to the Dada ‘anti-art’ movement. Dada, which emphasized freedom from the constraints of convention and morality, appealed to Man Ray and evoked from him a new playful artistic approach. His engagement with its ideas and his interaction is evident in his delight in toying with everyday objects, eliciting ambiguous and suggestive forms.

Moving to Paris in 1921, Man Ray set up a photographic studio with increasing emphasis on experimental techniques. These techniques reflected the influence of Surrealist ideas and imagery that surrounded him in his bohemian Montparnasse circle. Many of the experimental photographic techniques he deployed he popularized and became famous for, such as Rayographs (photograms) and his use of solarisation.

Between 1934-36 Man Ray photographed the mathematical objects at the Institut Henri Poincaré in Paris, as shown to him by the artist Max Ernst. ‘The fact that they were man-made was of added importance to me’, he wrote in his autobiography ‘Self portrait’, ‘and they could not be considered abstract as Breton feared when I first showed them to him – all abstract art appeared to me as fragments: enlargements of details in nature and art, whereas these objects were complete microcosms.’

Browse other works by Man Ray