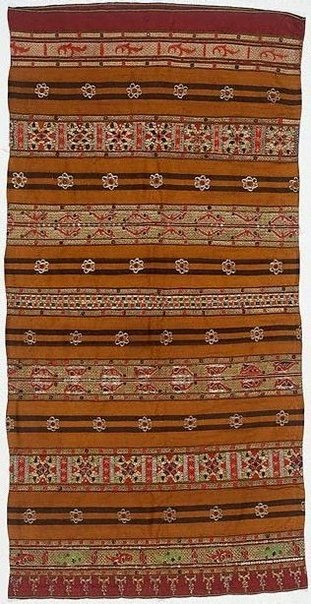 This elaborate tapis skirt, like most of the others, is composed of two pieces stitched together. The decorations consist of sequins and mirrors ('cermuk'), gold-wrapped threads, and green and red felt and woven wool pieces appliquéd and couched ('cucuk') on the skirt in bands typical of tapis. Many of the designs are geometric forms, but the appliquéd felt and wool pieces have a vegetal form, which have originated with the 'aso' shape found in Borneo among the Dayak people. The star shapes may have been inspired by Indian trade textiles. The 'tumpal' (inverted triangles) motifs at the bottom are considered to give the skirt “good legs” (M.L. Totton, 'Wearing Wealth', p. 120). The hidden weft threads of the skirt are red, and the visible warp threads are ochre, brown, and a reddish maroon. Similar pieces come from central and north Lampung from communities that follow the Pepadon tradition (M.L. Totton, 'Wearing Wealth', p. 32).